With China going back to work, how are other Asian economies faring?

Asian markets experienced a rollercoaster ride in Q1, chiefly due to the impact of the coronavirus outbreak. Now there are signs that a recovery in China, albeit moderate, may help wider Asian economies to stabilise. This could create opportunities for long-term investors.

As the first global economy to be afflicted by the coronavirus, China may be the first to emerge from the resulting period of disruption. In the wake of a fall in daily infections, the Chinese government has prioritised a return to work to kick-start the economy. According to government figures, almost all large corporations and 75% of small and medium-sized enterprises (SMEs) have resumed work, while data on coal consumption at power plants (see chart), worker migration, and traffic congestion also show continued progress towards previous levels. 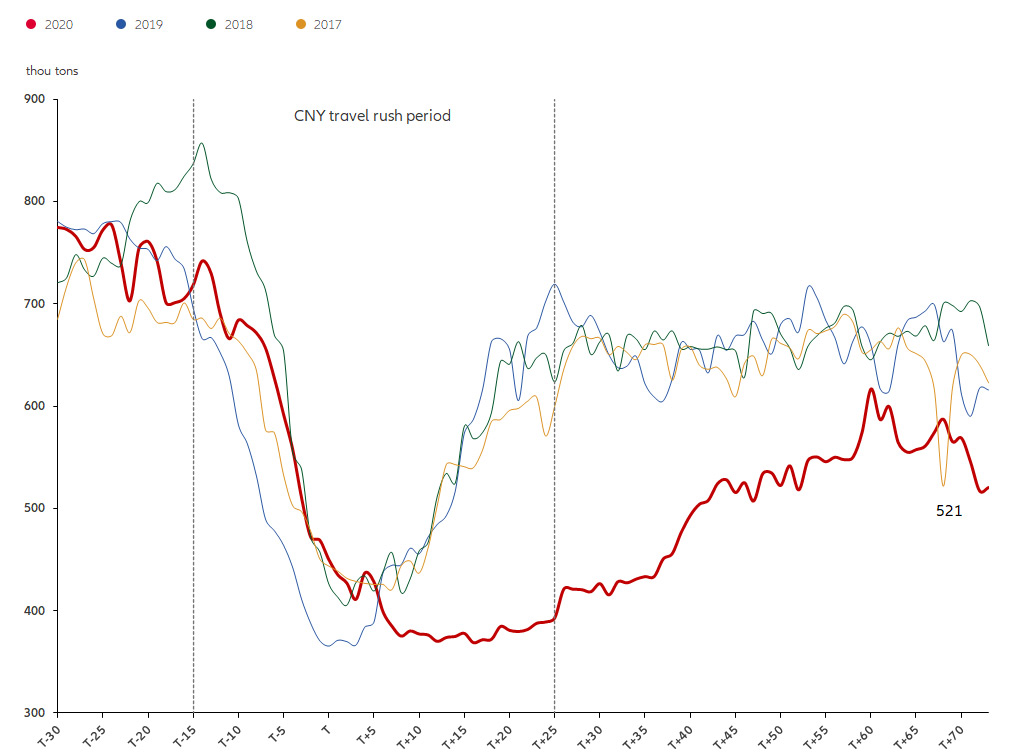 Source: Wind, AllianzGI Economics & Strategy, as of April 2020
The above chart is illustrative in nature and should not be considered a recommendation to purchase or sell a specific security, strategy or AllianzGI product or service.

With much of the rest of Asia, Europe and the US continuing to tackle the pandemic, pressure on the global supply chain – and, by implication, on China – continues to loom. As the largest trading nation in the world, with an 18% share of global exports, China is not immune from the negative impact of the pandemic beyond its borders, even if conditions domestically are improving. Its factories face the risk of key component shortage and a sharp drop in new orders from the rest of the world as the global economy suffers a sudden halt.

Notwithstanding the challenges of the global environment, we expect a moderate recovery in Chinese growth through Q2, assuming the country can control the imported and asymptomatic infection cases. We think other Asian economies are likely to recover subsequently, although the pace of a Q2 recovery is expected to be weaker given that the pandemic is still spreading outside of China.

Policy interventions have been positive, and further rate cuts are likely

While not a panacea, stimulus measures by governments and central banks to expand fiscal spending and ease monetary conditions can help limit the damage, while providing some support to affected businesses and individuals. We consider the governments in China, Hong Kong, Thailand and Indonesia as the most fiscally proactive in Asia, with their 2020 budget deficit scheduled to widen further than originally budgeted to combat the coronavirus impact.

Other economies such as India, the Philippines and Korea will also step up fiscal spending but to a lesser extent due to a relatively more conservative fiscal management style (see chart).

On monetary easing, we expect the central banks in economies such as India, Malaysia and the Philippines to cut their policy rates further, by 50 bps during the year. North-east Asian central banks such as those in China and Korea are likely to make more modest cuts of 30-40 bps and 25 bps respectively. Indonesia and Thailand are likely to make cuts in the order of 25 bps.

The recent collapse in oil prices could be a positive tailwind since most Asian economies are net oil importers. (Malaysia, as a net oil exporter, is the notable exception.) Lower oil prices not only help to reduce cost-push inflation and provide scope for monetary easing, they also help reduce oil import bills, which can boost current account surpluses or narrow current account deficits of the Asian economies. This is particularly helpful as Asian exports are expected to be depressed by the weakening of global demand. 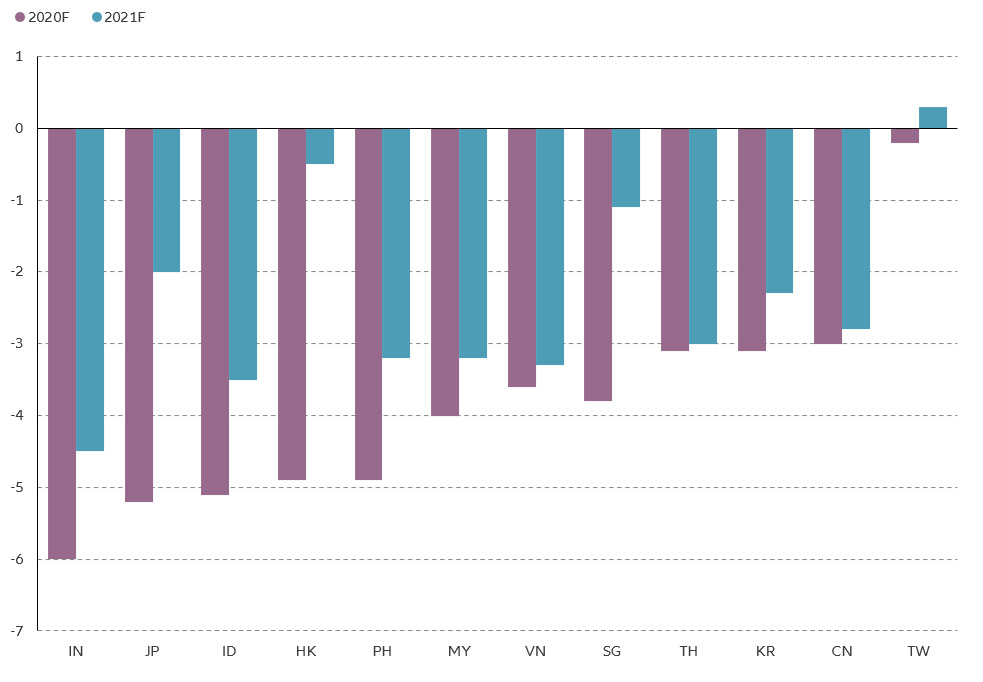 While the real economy will undoubtedly suffer as the pandemic spreads, market sentiment often improves when the daily new infection number peaks and starts to moderate. Credit spreads are another important indicator: they reflect the market’s view of the credit risk faced by businesses, which will likely deteriorate as the real economy remains pressured.

While aggressive central bank policy responses have helped restore stability in the USD funding markets for the time being, we remain watchful for any emerging stresses. The key risk now is how badly the economic downturn is likely to pressure companies’ cash flow and employment – and for how long. The public health crisis could become a growing financial crisis, if we see widespread credit defaults and other financial dislocations.

The prices of risk assets have corrected sharply over recent months, which may offer good value for long-term investors. This applies not only to the equity markets but also to credit and commodity markets.

Long-term investors with strong holding power may want to seek opportunities in emerging Asia. These countries could be well positioned in a post-coronavirus world as they benefit from a faster recovery of China and a positive interest rate differential with the G3 currencies. The positive interest rate gap against the US dollar would also boost capital inflows amid a prolongation of global quantitative easing. Equities in emerging Asia also offer better value than developed market when measured under CAPE (see Graph). The region also has lower level of USD debt (as a percentage of GDP) when compared to the developed world.

Being cautious and selective is essential, because the true impact of the pandemic on the real economy is not yet fully known. Any earnings downgrades and worsening credit conditions may put further pressure on prices, despite the more attractive current valuations.

How to help prepare for future shocks to bond liquidity

Shockingly low oil prices will shake up the energy industry, but it should recover

The coronavirus crisis and a price war have pushed the oil price well under USD 20 per barrel, with some futures contracts even falling below zero. We expect this to trigger many structural changes – both positive and negative – that investors will be able to factor into their portfolios before the energy industry recovers.