Are we running out of policy options for the next crisis?

The global economy will eventually face another downturn, which raises critical questions. With rates so low, what tools do central banks have left to spark a turnaround? What other monetary, fiscal or structural changes could head off problems? And what might happen if we don’t change our policy approach?

Do central banks have any ammunition left to ward off the next recession or economic crisis? Rate cuts have long been the conventional tool for fighting off downturns, but interest rates globally are already in low or even negative territory. Indeed, the US Federal Reserve recently cut its benchmark rate not because the US economy is doing poorly, but as an “insurance” measure to keep the economy growing.

Given today’s low rates, central banks and policymakers around the world are looking for new tools they can use during the next economic downturn. Yet not only is there no consensus about which options will be effective, but questions are being raised about assumptions that were once widely held – including how much central banks need to worry about inflation and whether government deficits matter at all. All told, the stage is set for a robust debate about which monetary, fiscal and structural policy measures will – or won’t – work.


What monetary policy can do – and what it can’t

Understanding which options central banks have starts with understanding what they do. To perform their core functions – generally speaking, to speed up or slow down economic growth – the tool they most commonly use is raising or lowering interest rates.

Today, rates are already very low in several major economies, and some developed nations have even implemented negative rates designed to encourage banks to lend rather than hold cash. But if rates move too far into negative territory, companies and individuals are more likely to remove money from negative-yielding accounts and hold it as cash. This weakens the banking sector and hurts economic growth, since this cash isn’t being put to work as investments or consumption. 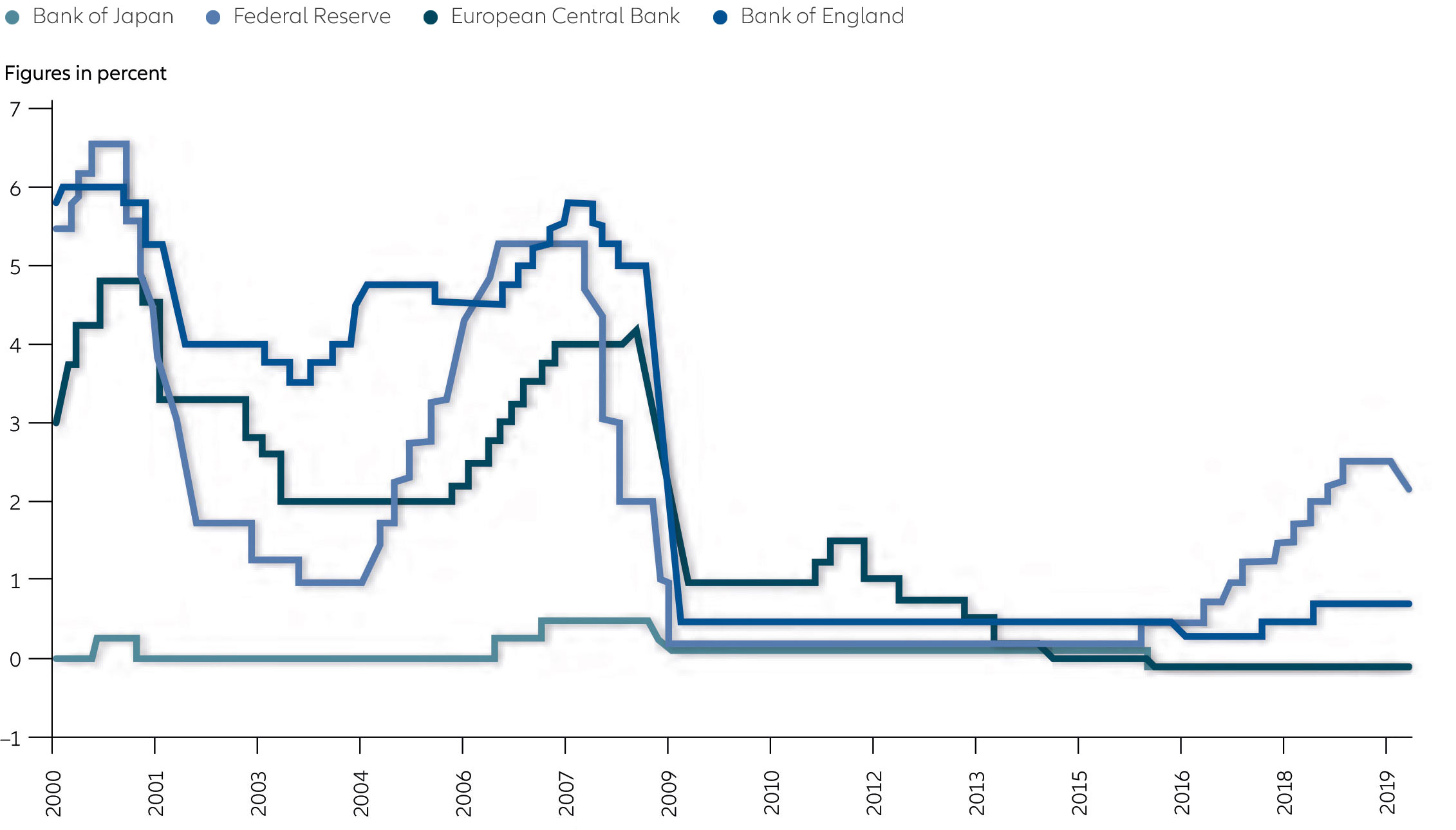 
Another conventional tool central banks use is providing liquidity – for example, through short-term measures similar to the Fed’s injections of capital into the US banking system during the 2008 financial crisis. More recently, the European Central Bank has launched multiple rounds of its “targeted longer-term refinancing operations” (TLTRO) programme to encourage banks to lend. Yet it’s reasonable to question whether banks today need these kinds of liquidity injections at all.

So what about so-called unconventional instruments? In most environments, central banks have several choices at their disposal, but each one presents potential problems:

There is another monetary-policy option for central banks – one that goes beyond deploying the conventional range of monetary-policy instruments. Simply put, central banks can adjust their objectives. For example, the Fed is considering setting a multi-year average inflation goal instead of using one specific target. But here, too, success depends on the private sector having confidence that the new strategy will be implemented successfully.


The costs of further monetary stimulus

Although central banks have many options for supplying monetary stimulus, there is a robust debate – sometimes a political one – about whether this stimulus is needed at all. One example can be found in the US, where the Fed is facing questions from both sides of the political spectrum about whether it relies too much on the Phillips curve (which measures the relationship between wages and inflation). Traditionally, the Fed has cited the Phillips curve as a reason not to keep rates too low out of fear that subsequent low unemployment will cause inflation to roar back. But some Fed critics think the Phillips curve is “dead” – that inflation and unemployment will both stay low – so there is more room for the Fed to supply additional stimulus.

However, the adverse side-effects of too much monetary stimulus can be easily overlooked:

Some warning signs are already evident in the current environment. The leverage (debt levels) of US non-financial companies has again reached all-time highs. In addition, weak companies have been renewing cheap bank loans, creating a large number of “zombie companies” with low productivity and high debt.

Against this backdrop, it may make more sense to raise interest rates to a neutral level over time – one that neither stimulates nor slows growth. Consensus estimates put the US neutral rate at 3%, though it differs for other regions. 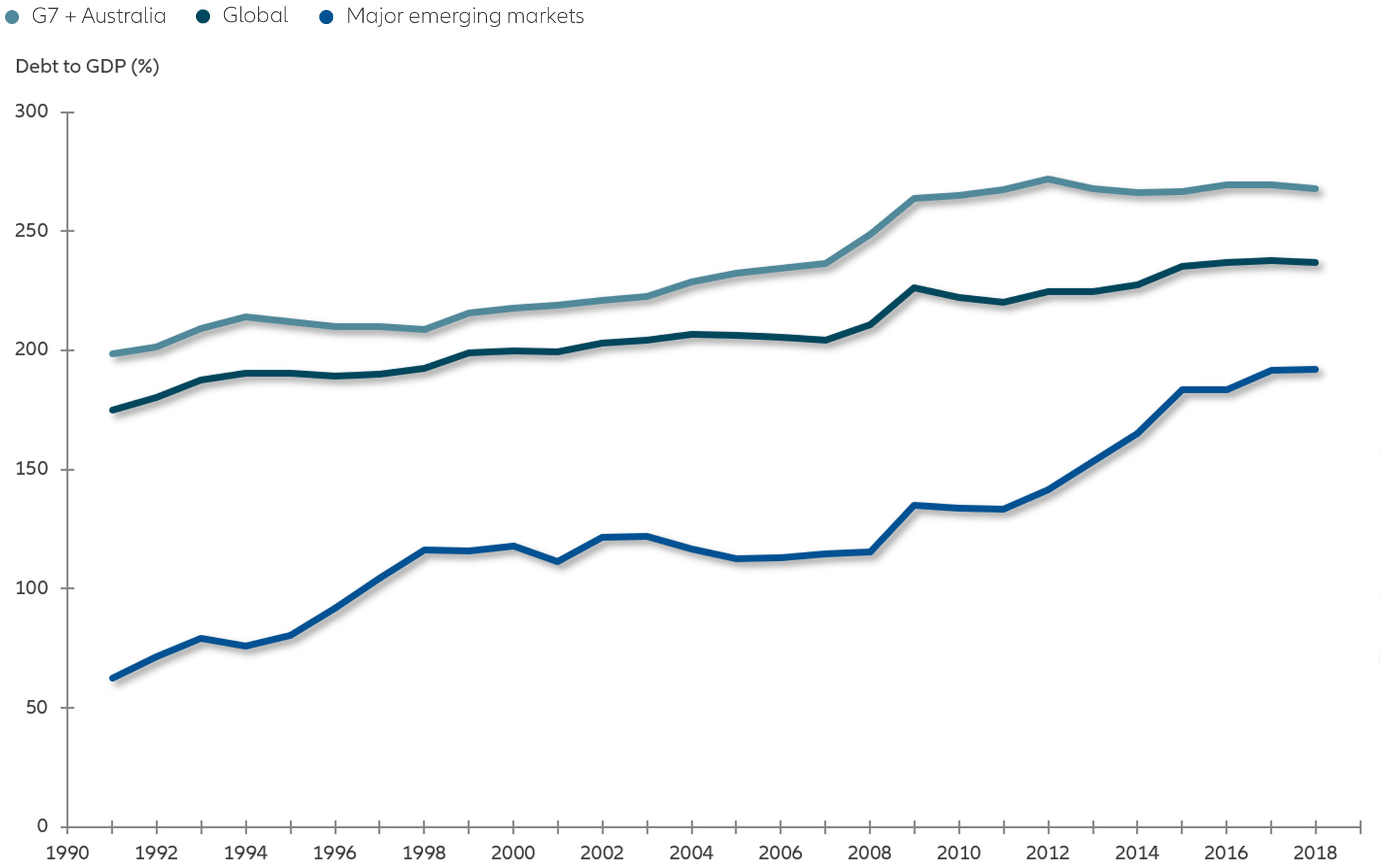 
The need for fiscal stimulus

Since the central-bank arsenal is limited in scope and effectiveness, there are increasing calls for governments to provide fiscal stimulus in the form of increased spending, reduced taxation or both. With the US-China trade war and Brexit increasing uncertainty and dampening investment activity worldwide, some argue that fiscal stimulus is needed to spark growth.

The problem is that many industrialised countries are already in debt and find it difficult to increase spending or reduce revenues. High public-debt levels can reduce potential growth in the long term – and public debt in industrialised countries already averages around 120% of GDP, which is on the historical high end. Moreover, many European countries have deficit ceilings that limit their ability to use fiscal-stimulus programmes.

Advocates of “modern monetary theory” (MMT) see no problem with this. They argue that a country’s fiscal leeway is ultimately inexhaustible: the central bank, being a public institution, can buy an unlimited volume of government bonds to fund spending. However, this ignores the fact that such a policy would undermine long-term confidence in a country’s currency.

Both monetary and fiscal policy can address weaknesses in overall economic demand, but they can’t fix inherent structural problems within an economy, such as low productivity. In fact, in extreme circumstances, employing more aggressive monetary and fiscal policy tools can be counterproductive if they lead to a misallocation of resources. But implementing long-term structural reforms can help to boost the overall international competitiveness of an economy and make it more productive and innovative.

Structural reforms may include financial support for start-ups, smart investment in education, targeted deregulation or international trade deals. Implementing structural changes such as these can address aggregate supply in an economy may be more suitable for lifting economic growth over the long term – not just temporarily.

Despite the limitations of “loose” monetary policy in the form of low interest rates and other measures, central banks around the world seem intent on continuing down this path. The Fed has resumed cutting rates as “insurance” aimed at keeping the US economic expansion going. The ECB is launching a new round of bank loans and raised expectations of interest-rate cuts and bond purchases in the near future. In addition, earlier this year, the Bank of England retreated from its plans for multiple rate increases.

Equity markets have generally embraced the news of more monetary-policy stimulus, but not always:

From our perspective as an active asset manager, it’s clear that the monetary policy of central banks isn’t the only factor to watch when making portfolio decisions. There are other ways for policymakers to make an economy stronger or weaker – including by changing fiscal policy or implementing structural changes. Investors would be wise to watch these factors as well.

Stefan Hofrichter is AllianzGI’s Head of Economics & Strategy since 2011. Stefan and his team are responsible for advising clients, in-house investment professionals and sales colleagues on global economic trends and asset allocation.

Investors are increasingly starting to realize that they have the power to make an impact by choosing where and how to invest their assets. Allocating capital with the intention to create impact allows investors to influence the way the economy works or how a company operates.