To gauge an economy’s health, watch the “financial cycle”

Has the global economy once again become overloaded with debt? More than 10 years on from the financial crisis – which was, at its core, a debt crisis – there are signs that indebtedness is reaching worrisome levels. Our research shows that global leverage for all sectors stands at 298% of world GDP, which is close to the all-time high of 303% set in 2009. That’s significantly higher than the 279% level set in 2006, on the eve of the financial crisis.

Yet high leverage alone isn’t the only factor that can hurt an economy. What’s more telling is how debt and asset prices interact in a kind of feedback loop that occurs when the private sector’s easy access to credit pushes up asset and property prices. This raises the value of the underlying collateral, which increases the amount that can be borrowed. The process continues to repeat until some event throws it into reverse – at which point credit can dry up and asset and property prices plunge. What’s more, the outstanding debt can linger for years, further dragging down growth.

This self-reinforcing process is at the heart of the concept of the “financial cycle”, which was developed by the Bank for International Settlements (BIS) after the financial crisis. It is different from the more commonly cited metric of the business cycle, which notes the ups and downs of real GDP. We think it’s an important metric:

We conducted our own research into historical financial cycles, covering 26 developed and emerging economies, and arrived at similar conclusions to the BIS. We found that during expanding financial cycles, higher home prices and greater access to credit have acted as tailwinds that helped economic growth. Recessions have still happened during times like these, as Chart 1 shows, but they tended to happen infrequently and were generally less deep and less long when they occurred. (However, we only analysed developed markets’ recessions, given the difficulty of defining recessions in emerging markets that have much higher long-term growth rates.)

This makes sense intuitively: houses are typically the biggest single asset of any household and are usually debt-financed. Accordingly, an expanding financial cycle indicates improving private household balance sheets and a generally growing economy, since those factors help people feel good enough about their finances to take on debt and buy homes. This shows why high levels of private-sector debt aren’t warning signs in and of themselves. The shallow recession in the US in 2001 is a good example of a short-lived recession during an expanding financial cycle.

Conversely, when house prices fell and banks constrained credit growth – that is, when the financial cycle contracted – recessions have tended to be deeper and longer. The financial crisis of 2007-2008 is the most severe version of a recession in times of a contracting financial cycle.

This brings us to another important finding: near the peak of a financial cycle, there seems to be an approximately two-thirds probability that a country will face a financial crisis – be it a banking crisis, sovereign-debt crisis or foreign-exchange crisis. In our analysis, all but two of the 36 recent crises we identified happened around the peak of their respective country’s financial cycle. This stands to reason, given that the peak of a financial cycle represents peak real-estate prices and debt levels – sometimes depicted as bubbles that inflate to unsustainable levels before they burst.


Chart 1: The financial cycle vs the business cycle
This non-representational graphic was built on our analysis of 26 economies since the 1970s to show the relationship between financial and business cycles. Financial-cycle peaks have been a warning sign for financial crises, while GDP growth has tended to be more stable when financial cycles are expanding.


Where in the financial cycle are we today?

In developed economies, the financial cycle seems to be expanding in countries that either caused the financial crisis in the first place (the US, UK and euro zone) or that suffered severely (Japan), as Chart 2 shows. The financial cycle also appears to be expanding in New Zealand. Even though we can’t rule out a recession in the US, the euro zone , the UK or Japan in the coming one to two years – some of our models are indeed pointing at a rising recession risk – we believe that any recession there is likely to be moderate.

Chart 3: Financial cycles are peaking or contracting in some developed and emerging markets 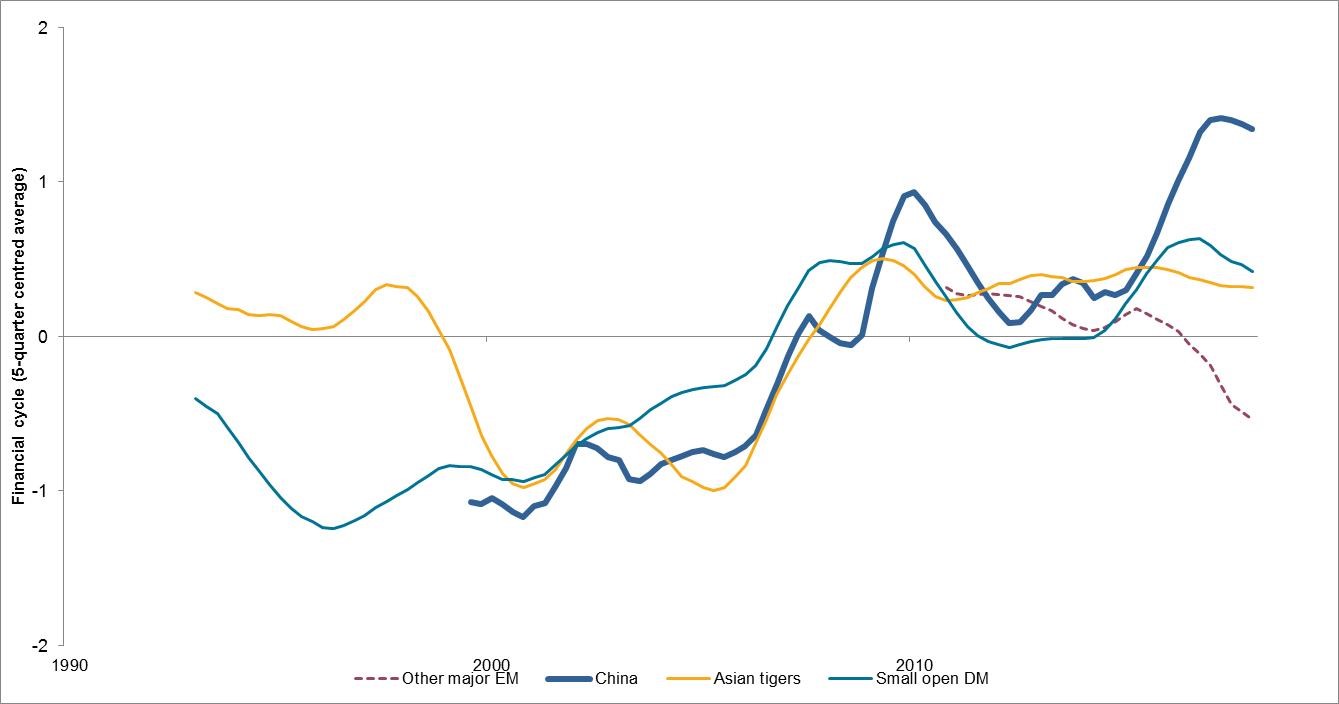 For investors, the high debt levels seen in the world today remain an important risk to watch, both for economic growth and for financial markets. Yet high leverage isn’t the only factor worth monitoring; rather, it’s how debt and asset prices interact in the financial cycle that can help investors decide which risks are worth taking.

This is particularly important in times like these, when the biggest risk may be to take no risk. It also underscores the need to manage risk actively: a passive portfolio that merely tracks an index could be entering a difficult environment as the financial cycle contracts in the underlying economy. Active investing provides more than a defence against potential deteriorations in the global economy or regional ones: it also provides the chance to be proactive during periods of higher volatility and lower correlations.

Nevertheless, compared to the pre-financial-crisis period, the financial cycles of major developed economies seem to be in reasonably good shape this time around – a fact in which we take some comfort.

For more information on late-cycle investing, read "Why investors should get active in a late cycle economy".

Pet insurance is big business in the US

Stefan Hofrichter is AllianzGI’s Head of Economics & Strategy since 2011. Stefan and his team are responsible for advising clients, in-house investment professionals and sales colleagues on global economic trends and asset allocation.

Financial advisors do not view robo-advisors as competition

A new study featuring financial advisors in the US shows that they do not consider robo-advisors a serious threat, and most do not expect to make changes to their business to address them. Only a few have reduced fees or improved services to better compete.