The creditworthiness of an emerging market country is dependent on many factors. Typically, investors focus on a range of macroeconomic variables, such as fiscal deficits, debt levels, or the stock of foreign exchange reserves.

Why ESG for emerging markets?

The creditworthiness of an emerging market country is dependent on many factors. Typically, investors focus on a range of macroeconomic variables, such as fiscal deficits, debt levels, or the stock of foreign exchange reserves. Healthy macroeconomic indicators are a necessary condition for sound economic development. However, they are not sufficient without further consideration of a country’s performance on longer term issues related to environmental standards, social outcomes and the governance of state institutions. ESG factors are drivers of economic development which will play a key role in determining a country’s ability to repay its debt.

The materiality of ESG factors for sovereign bonds has been documented in our previous research.2 We think that ESG considerations are potentially even more relevant when focusing on emerging markets (EM). Differences in levels of socio-economic achievement, the degree of political stability or the respect for the rule of law vary significantly between countries. The emerging market debt (EMD) asset class has grown and become significantly more diversified in recent years, as countries from all regions issue bonds for the first time. Most of the growth over the past decade has come from frontier economies where ESG practices can often be lax.

This is why we developed an in-house propriety ESG framework, which aims to capture these differences. It helps identify long-term factors and dynamics that might not be fully reflected into sovereign bond spreads. We believe that integrating ESG factors in the investment decision making process will help investors mitigate certain risks and improve the quality of their portfolios.

Our proprietary ESG framework covers over 90 investable EM countries. The first step in building this framework is to select the indicators that are most relevant. The selection is driven by three main considerations: how well an indicator captures a certain dimension; the breadth of country coverage and credibility of the source; and how much control the government has over implementing policies that can directly affect the outcome. In total, 18 indicators are selected from various third-party sources (see Chart A/). We deliberately aim to keep the number of indicators relatively low, in order to make the framework usable. It also makes it easier to identify areas of weakness on which to engage with sovereigns.

For each one of our 18 indicators, Z-scores are calculated, which indicate where each country stands compared to the average on that dimension. The Z-scores are then averaged for each of the three pillars, providing a score for each pillar. Finally, the overall ESG score is computed as a weighted average of each pillar’s score. The environmental pillar is given a weight of 20%, the social pillar 30% and governance 50%. We believe that governance factors have the greatest potential impact on a country’s ability to implement robust environmental standards and achieve favourable social outcomes. Lastly, our ESG scores are normalised on a scale from 0 to 10. 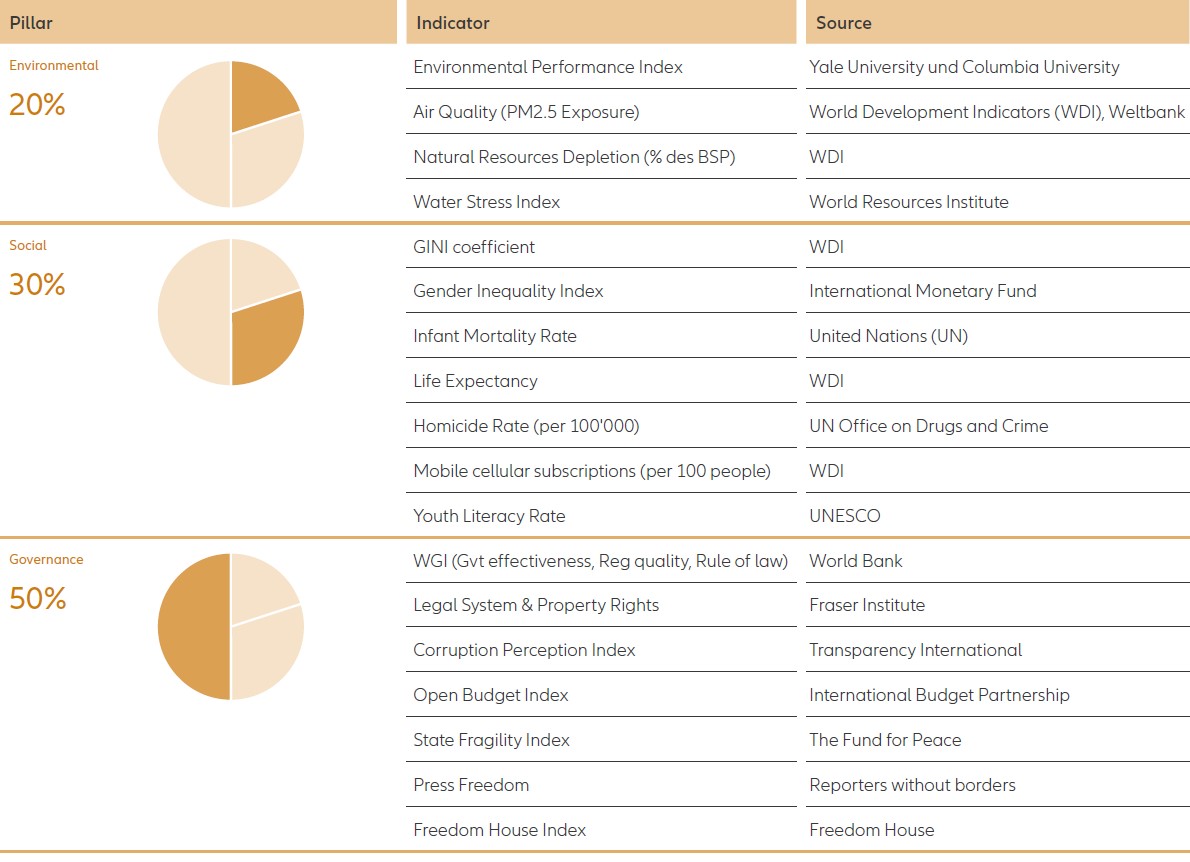 Transparent policy-making and sustainable growth are frequently associated with a greater likelihood of debt repayment.

The ESG framework is an integral part of the investment process for EM debt as it can help account for differences in sovereign creditworthiness. Deterioration in a country’s ESG score can be expected to be accompanied by wider credit spreads on its bonds. The close link between ESG factors and credit spreads is visible in the significant correlation between the two metrics3 (see Chart B/). Of course the relation is far from perfect, so that deviations of credit spreads from those implied by a simple regression model can be used as an indication of possible richness or cheapness of sovereign credits on an ESG basis.

Due to the limitations of ESG data which are often lagged and slow moving, we find it necessary to complement the analysis with an assessment of whether a country is on an improving or deteriorating ESG trend. This is done as part of our regular internal research process. Complementing the hard data with a forward-looking assessment allows us to reflect more recent changes in policies that might potentially influence ESG quality. For example, the recent weakening of the rule of law in Poland has not yet been fully reflected in the country’s still high ESG score.

Combining the quantitative and the qualitative outputs of the framework generates interesting signals. In particular, countries that flag as cheap on the regression model and are on a positive direction of travel should be of interest as it suggests that ESG factors might not be fully priced in. 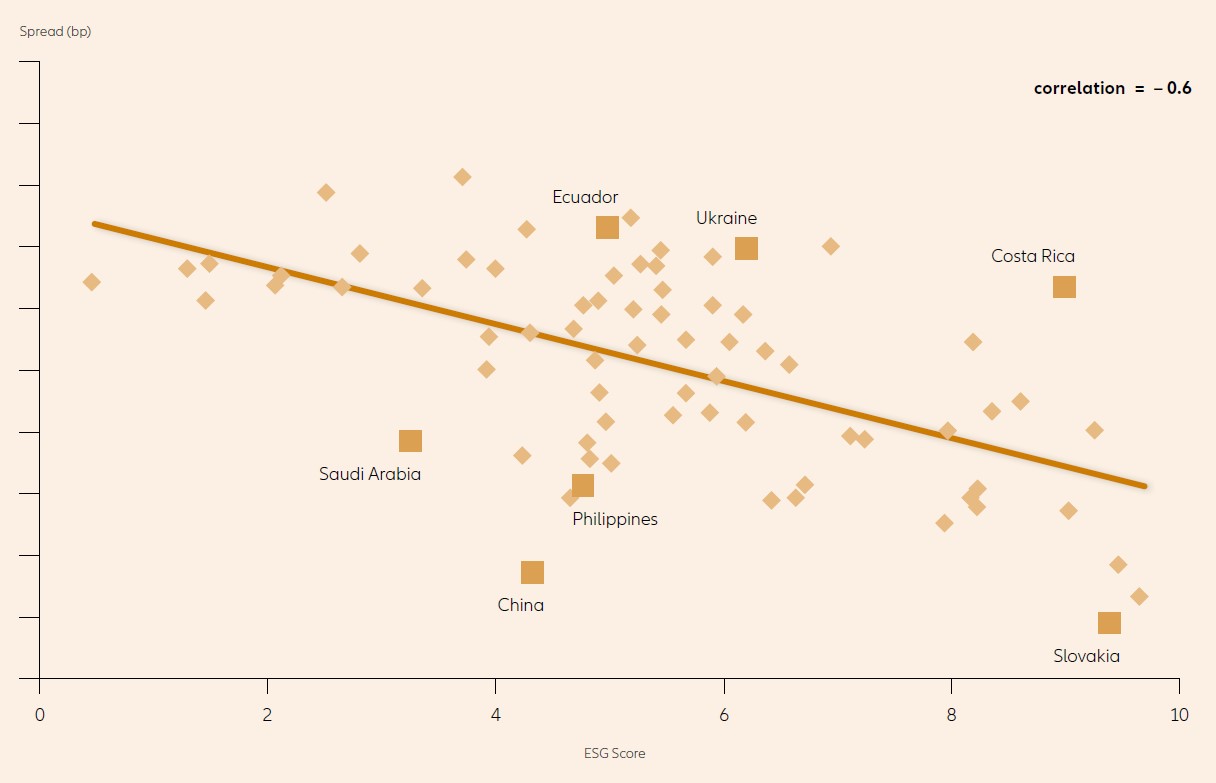 The ESG framework is an integral part of the investment process for EM debt as it can help account for differences in sovereign creditworthiness.

The ESG framework can be used to build exclusion lists, in order to answer investors’ potential concerns on various ESG- related issues, and improve the profile of an EMD portfolio. Filters can be set up for country selection based on the overall ESG score, or based on different weighting for E, S or G. This will enable portfolios to be managed against SRI or ESG benchmarks (such as the JPM ESG Suite of indexes), or tailored solutions to meet client requirements and preferences.

One such approach could be to exclude countries falling below the 10th percentile on each of the three pillars. The idea is to insulate portfolios from the worst offenders on each ESG dimension, making sure that a country performing particularly badly on any single pillar is still picked up by the filter even if it performs better on the other two pillars. For instance, it ensures that Venezuela is excluded due to significant deficiencies on the governance front, even if it scores above average on the environment pillar.

Besides potentially avoiding outright sovereign defaults, utilising the framework for exclusion strategies, can also help limit exposure to countries where ESG factors are gradually deteriorating, which might eventually lead to underperformance. The trend in Turkey over the past few years has been a good example of how value can be added by an early consideration of ESG factors (see Chart C/). 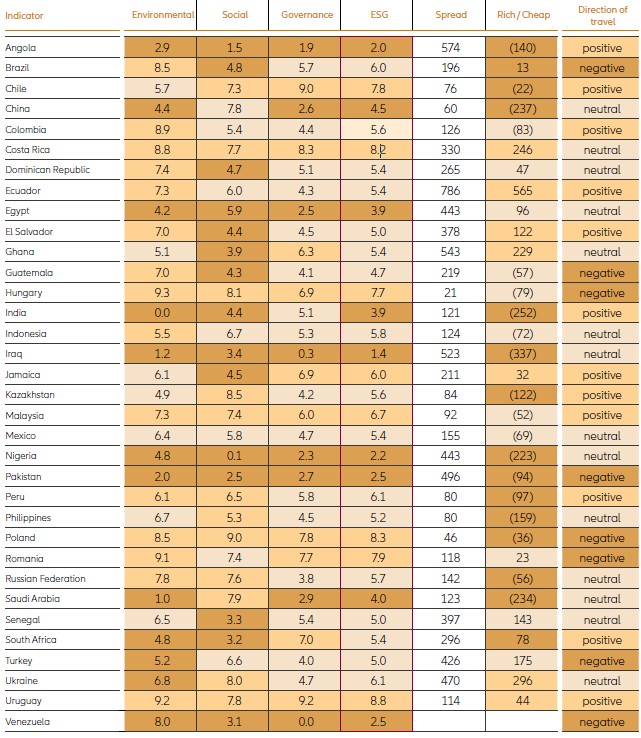 In 2018, Turkey was buffeted by a severe shock as tighter global liquidity conditions and rising geopolitical tensions with the US combined with a build-up of economic vulnerabilities (high inflation, large external imbalances, FX mismatches and rapid increase in corporate debt leverage) to trigger a currency crisis. However, the deterioration in Turkey’s social and governance factors was already evident for a number of years, which eventually made the country significantly less well equipped to deal with the economic crisis.

Social tensions came to the forefront in 2013, when the government cracked down violently on protesters against an urban development plan. Protests were also fuelled by concerns over freedom of the press and limits on social media activity. Social divisions intensified after the ceasefire with Kurdish rebel groups fell apart in 2015 and the insurgency erupted again. Kurdish members of Parliament have been arrested and the Turkish military became involved in the border region in Syria to contain the advance of Kurdish fighters there.

Over the last few years, President Recep Tayyip Erdogan (RTE) worked to concentrate power at the expense of independent institutions. His constant attacks against the central bank kept it from implementing an adequate monetary policy. Independent media have all been taken over by the state and many journalists have been jailed. Following accusations of corruption against his government, and his family entourage, RTE cracked down on members of the Gulen organisation in the judiciary, military and education systems. The rise in fragmentation erupted with an attempted military coup in July 2016. While the failed coup was testament to Turkey’s social divisions, the backlash proved to have a more lasting effect. RTE purged thousands of suspected Gulen followers from official institutions, and moved to consolidate power the following year, by transitioning to an executive presidency system which greatly weakened the powers of Parliament.

Issues related to social cohesion and governance are now leading to a large brain drain out of Turkey, accentuated by the purge of government bodies following the failed coup. For a long time, many investors judged that mounting concerns on social and governance issues did not have a significant bearing on the broader macroeconomic framework. However, this perception proved wrong as the gradual trend of weakened institutions and concentration of power in RTE’s hands culminated in the replacement of respected economic policy-makers with the president’s son- in-law at the finance ministry. As a result, Turkey has become much less resilient than in the past. The capacity to implement a package of needed economic adjustment measures is now weakened. Since the failed coup attempt, the performance of Turkish government bonds has been significantly weaker than that of the other emerging markets (see Chart D/).

Source: JP Morgan. Past performance is not a reliable indicator of future results.

Emerging market debt is an increasingly diverse asset class. In this respect, active asset management is key and it should be coupled with a robust, integrated ESG investment process. With this in mind, we have developed a proprietary framework to integrate our assessment of ESG factors into the more traditional analysis of macroeconomic drivers in emerging economies. ESG integration will help investors improve the quality of their portfolios and mitigate certain risks. In addition, investors will need to start engaging with sovereign issuers on the more qualitative aspects of risk, including ESG factors.

1) Allianz Global Investors [2017]: Financial materiality of ESG risk factors for sovereign bond portfolios by Dr. Steffen Hörter, Global Head of ESG Strategy, Allianz Global Investors
2) The correlation between the ESG score and the logarithm of credit spreads is -0.6. We take the logarithm of credit spreads since the relation between spreads and credit quality indicators (credit ratings, macroeconomic variables or ESG score) is closer to an exponential fit rather than a linear one. The relation between the two variables remains even when other factors, such as credit rating and macroeconomic indicators, are controlled for.

The underperformance of momentum-driven investment strategies in the recent past has caused some investors to wonder: Is momentum dead as a risk factor? Kai Trinkies, Team Lead Conusltant Relations, likes to discuss this issue with Thomas Zimmerer, Global Co-Head of Multi Asset at Allianz Global Investors.