As global momentum stalls, the US remains a beacon of stability

While the global economy may be stuttering, there's still room for confidence. The second half of 2018 could get a steadying boost from the US economy – and US consumers.

What's behind stalling growth?
The global growth slowdown began with the slowing of economic momentum indicators. The economic surprise indices, for example, have dropped substantially in both Europe and globally, while we see relative stability in the US. (See Exhibit 1.)


Economies have been hurt by uncertainty around trade, which impacts the European and Latin American regions disproportionately, as well as stronger currencies for much of last year, which may now have a lag impact on earnings.


However, we have now started to see some stabilization, with easing political strife, diminished trade tension with China and plateauing economic momentum. Notably, a coalition government forming in Italy has supported stability, as has a pause in the rising US dollar, which provides some respite for emerging markets. We believe we could see momentum resume as we enter the second half of the year, particularly if confidence returns to Europe and emerging markets; while we are watching indicators closely, we continue to see 2018 global growth reaching 3.0% – above-potential growth.

The US continues to chug along
Unlike much of the global economy, the US has demonstrated stellar earnings and economic growth over the first half of this year, despite global tensions. First-quarter earnings for the S&P 500 Index ended with strong 25% year-over-year growth¹, while US GDP growth is expected to be 2.8% in 2018 overall², well above potential.

And regardless of the ongoing trade rhetoric, the US remains a relatively closed economy, not as exposed to export demand as most of the world. Only about 12% of GDP comes from exports, versus 29% globally. (See Exhibit 2.)


Exhibit 2. The US economy has relatively robust barriers to trade
Only 12% of US GDP growth comes from exports


Exhibit 3. US equities and consumer confidence have an uncanny relationship

A healthy consumer often points to a healthy economy

What's been working so far? US-focused assets
Generally, we have seen US-centric assets perform well this year. US small-cap holdings, for example, have outperformed; these companies are domestically oriented, have less exposure to global trade tensions and can benefit from US tax reform. (See Exhibit 4.) Furthermore, technology and consumer discretionary companies have also been the top-performing sectors in the S&P 500 this year. 4 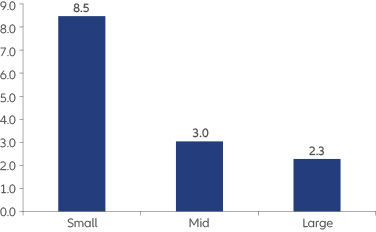 
The US dollar has been strengthening, up 10% from recent trough to peak5, which has hurt emerging-market equity and debt. More recently, we have seen the dollar stabilise; this may continue in the second half of the year as global economies is become more stable as well. The ECB is also in focus as it begins to wind down its bond-buying program.

Finally, oil prices, which have been rising for much of the year (up 35% over the last 12 months), are also pausing, offering some relief to oil importers.6 This may provide further respite to US consumers at the pump as we head into the summer driving season.

Risks to consider
As we look to the second half of the year, we believe investors should remain vigilant as volatility will likely remain elevated. There are certain risks that may derail the generally sanguine US outlook:


Five to watch
Here are five key themes that will likely power markets in the months ahead.

Growth and small caps are in the sweet spot

Within the US equities universe, growth and small-cap stocks have outperformed; we believe both these areas have legs as the US continues to outperform. Our conviction lies in the long-term story of “winners from disruption”, particularly in the technology, health care and discretionary sectors.

Value may take the lead

Over this cycle, we believe value sectors may show signs of market leadership; we have already seen energy perform well and believe financials can do the same. With recession unlikely in the US over the next 12 to 18 months, it remains early for a rotation into highly defensive sectors like consumer staples and utilities.

Within the fixed-income universe, we continue to favour shorter-duration strategies, and we still find selective higher-yielding fixed-income securities to be attractive given that we do not see a rise in defaults on the horizon. We also continue to favour a convertibles strategy, which has potential upside from equities as well.

We remain selective in international exposure. With softness in Europe and some rollover in emerging markets, we continue to look to Asia as a source of growth – and in certain cases income and yield. We favour China, where long-term domestic demand remains attractive.

Alternatives are more than just an idea

As we get further along this cycle, we also believe investors should gradually increase their allocations to alternative strategies – such as absolute return, private credit and infrastructure equity – which are generally uncorrelated to equity markets over time.


Investing involves risk. The value of an investment and the income from it will fluctuate and investors may not get back the principal invested. Past performance is not indicative of future performance. This is a marketing communication. It is for informational purposes only. This document does not constitute investment advice or a recommendation to buy, sell or hold any security and shall not be deemed an offer to sell or a solicitation of an offer to buy any security. The views and opinions expressed herein, which are subject to change without notice, are those of the issuer or its affiliated companies at the time of publication. Certain data used are derived from various sources believed to be reliable, but the accuracy or completeness of the date is not guaranteed an no liability is assumed for any direct or consequential losses arising from their use. The duplication, publication, extraction or transmission of the contents, irrespective of the form, is not permitted. This material has not been reviewed by any regulatory authorities. In mainland China, it is used only as supporting material to the offshore investment products offered by commercial banks under the Qualified Domestic Institutional Investors scheme pursuant to applicable rules and regulations. This document is being distributed by the following Allianz Global Investors companies: Allianz Global Investors U.S. LLC, an investment adviser registered with the U.S. Securities and Exchange Commission; Allianz Global Investors GmbH, an investment company in Germany, authorized by the German Bundesanstalt für Finanzdienstleistungsaufsicht (BaFin); Allianz Global Investors Asia Pacific Ltd., licensed by the Hong Kong Securities and Futures Commission; Allianz Global Investors Singapore Ltd., regulated by the Monetary Authority of Singapore [Company Registration No. 199907169Z; Allianz Global Investors Japan Co., Ltd., registered in Japan as a Financial Instruments Business Operator [Registered No. The Director of Kanto Local Finance Bureau (Financial Instruments Business Operator), No. 424, Member of Japan Investment Advisers Association and Investment Trust Association, Japan]; and Allianz Global Investors Taiwan Ltd., licensed by Financial Supervisory Commission in Taiwan.

Could the US dollar lose its reserve-currency status?

How to repair economic inequality

Wealth and income inequality are pressing global issues, affecting the quality of life for countless people, suppressing economic growth, stretching governments’ capabilities and destabilising social systems. The good news? Politicians, corporations and investors can all do their part to enact change.