Will rising uncertainty halt the charging US bull?

Economic uncertainty in emerging markets, potential contagion to other nations and trade disputes could stall the vibrant first-half US equity-market rally. But the markets could stabilise towards year-end as mid-term elections conclude – particularly if trade disputes improve and corporate earnings remain robust.

The end of summer and beginning of autumn has historically been a time of heightened volatility in the US equity markets. Given the robust recent performance of the US, particularly relative to the rest of the world, we see an increasing likelihood of a market pause in the coming months.

Volatility in equity markets has historically risen in September and October, which are known for their uncertainty and higher-than-average corrections (see Exhibits 1 and 1a). 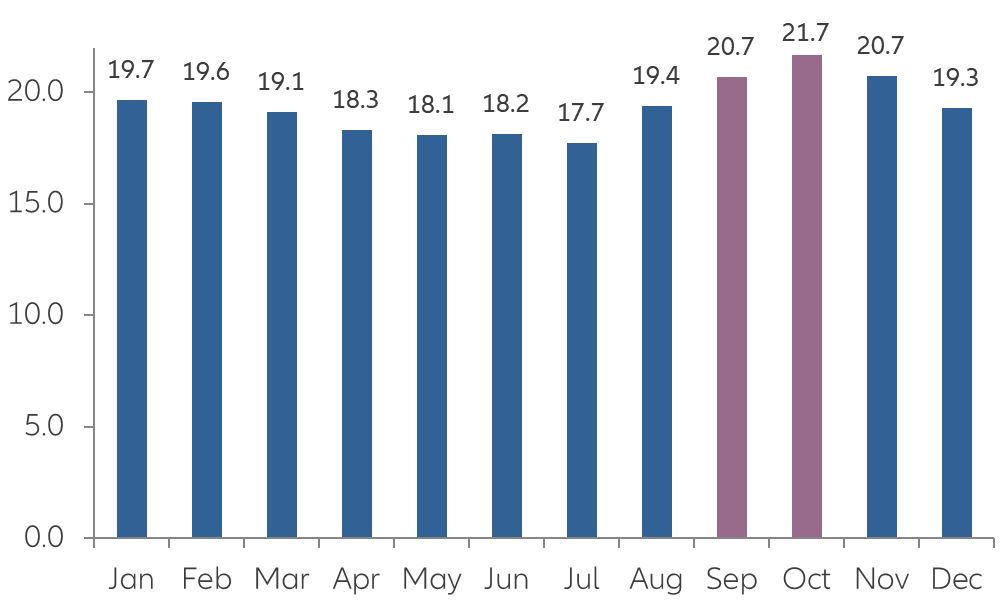 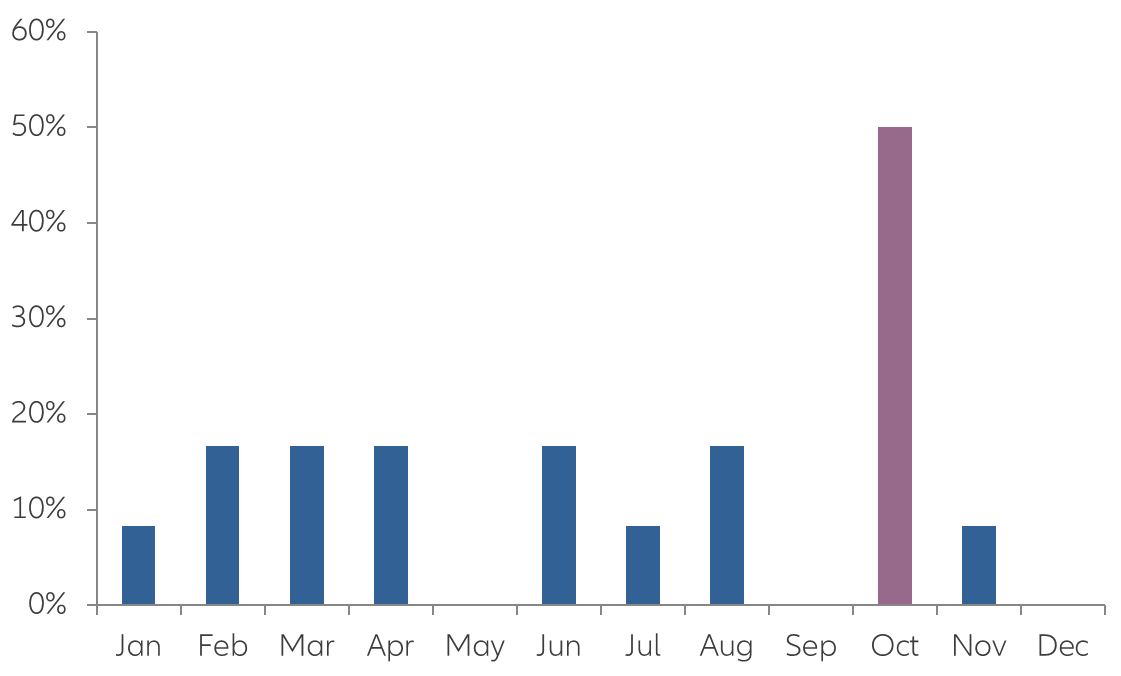 
Meanwhile, US economic outperformance has continued, the S&P 500 Index and the Nasdaq reached fresh third-quarter highs, and US consumer and business confidence has remained elevated. Yet increasing global risks may create uncertainty.


Risks in emerging markets are rising

Turkey and Argentina both face challenges as their currencies continue to sink: compared with the US dollar, both the Turkish lira and Argentine peso lost more than 40% of their value from 1 January to 1 September (see Exhibit 2). 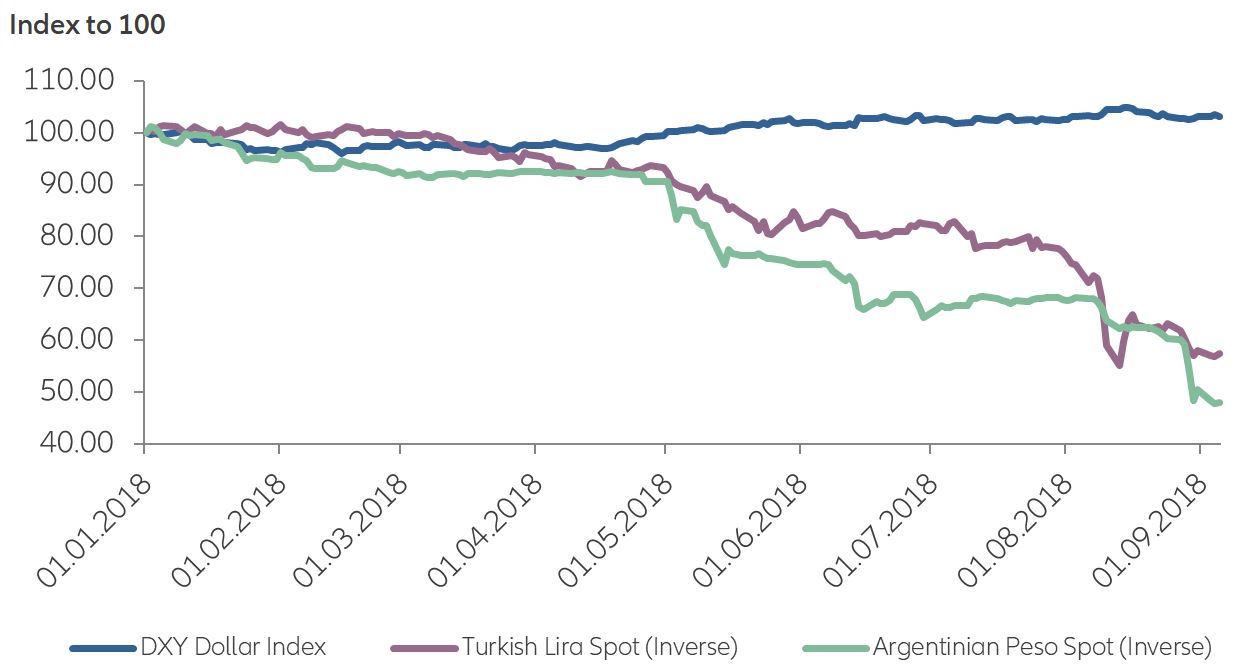 Source: Bloomberg. Data as at September 2018.


Turkey’s currency crisis
As Turkey faces rising inflation and widening current account deficits, the lira’s slide has been exacerbated by a rift between US President Donald Trump and Turkish President Recep Tayyip Erdogan. This has resulted in the doubling of tariffs on steel and aluminium exports to the US. Turkey faces roughly USD 150 billion in private-sector debt that comes due in July 20191 – debt that it will likely need external funding to cover. Support could take the form of an IMF relief package, similar to Argentina’s, although that would face a much bigger political battle in Turkey.

Argentina’s peso problem
Argentina’s currency has devalued by more than 50% against the US dollar despite a USD 50 billion IMF stand-by package, which was negotiated in June 2018. Concerns persist over Argentina’s slowing economic growth, rising inflation and recent promises to shrink its fiscal deficit. Although the Central Bank of Argentina attempted to support its peso with a surprise 15% rate hike, bringing its benchmark rate to 60% (the highest in the world)2 – we continue to see a crisis of confidence in Argentina, which may now need to ask for faster or greater IMF relief.

Could contagion spread to other developing economies?
More broadly, we continue to watch for contagion from Turkey and Argentina – first, to other emerging-market economies, particularly those with wide current account deficits and high external debt needs, and then to the developed world. If the US dollar keeps trending upward this year, driven by economic and interest-rate differentials, this would put further pressure on the most vulnerable emerging-market countries (see Exhibit 3).

Progress in the trade war continues to be made in fits and starts:

What could stabilise the markets?

As the year progresses, market stability could come from a few sources:

Investing involves risk. The value of an investment and the income from it will fluctuate and investors may not get back the principal invested. A tail event is unpredictable; therefore, investments in instruments tied to the occurrence of a tail event are speculative. Past performance is not indicative of future performance. This is a marketing communication. It is for informational purposes only. This document does not constitute investment advice or a recommendation to buy, sell or hold any security and shall not be deemed an offer to sell or a solicitation of an offer to buy any security.

by Mona Mahajan | 6 days ago

Booming US economy provides support for the Fed’s approach

A confident ECB wants to keep its options open

The recent US equity market setback seems to be little more than a wobble. The global economy is not in recession, although it is slowing down, and monetary policy is still accommodative across the board. Nevertheless, this is cold comfort to investors who have become sensitive to even smallish corrections.