The creative power of disruption

“Disruption”: no word better describes the age we live in. Disruption – the destruction of the old by the new (and better), driven by technologies based on digitalisation and artificial intelligence.

From the steam engine, the railway and the automobile to information technology, robots and artificial intelligence – groundbreaking innovations have always been the driving force behind changes in working processes and social structures, thereby helping to create the growth of affluence.

We can visualise this by looking at the growth in global gross domestic product (GDP). For centuries, GDP barely changed at all in a measurable way. Then, with the dawn of industrialisation, it began to rise sharply, even exponentially. Population growth followed suit. At the beginning of the 19th century, the global population exceeded one billion for the first time. Yet the famines feared by Robert Malthus did not come to pass. Innovations in agricultural technology not only ensured that more and more people could be fed, but also increased prosperity (income per head). Prior to industrialisation, bitter poverty had been the norm for all but a powerful elite. By the early 1980s, the proportion of the world population living in absolute poverty (living on less than US$ 1.90 a day) stood at 45%. Today, it is just 10%, despite the fact that the global population has grown to approximately 7.5 billion. Without innovation, without technology, many would simply have starved (see Chart A/ and Chart B/).

B/ Percentage of the world population who has less than $ 1.90 a day to live.

The decline in absolute poverty has been paralleled by the emergence of a “global middle class.” The World Bank defines the “middle class” internationally as comprising those earning between US$ 11 and US$ 110 a day, based on 2011 purchasing power parity. As the Brookings Institution think tank has concluded, the world recently reached a “tipping point” in September 2018: for the first time, half of the global population are now “rich” or “middle class,” and the other half “vulnerable” or “poor.” Brookings predicts that this trend of declining poverty and a growing middle class will continue. While the number of people considered poor will fall further, the ranks of the middle class are set to swell to 5.3 billion people by 2030.

Growing prosperity is the driver behind these developments, and is leading not only to higher living standards thanks to medical care, access to clean water and electricity, but also to the spread of technology. Over 85% of people have access to electricity.

At the same time, the spread of information is accelerating, and an ever-larger share of the world population has access to knowledge and markets e.g. via smartphones and the Internet (see Chart D/).

Of course, there is a flip side to everything. This is clearest when it comes to the environment, and especially the level of CO2 in the atmosphere, which has increased exponentially since the Industrial Revolution. The concentration of CO2, which stood at approximately 280 ppm in the centuries prior to industrialisation, is now 400 ppm and rising.

But there is another interesting trend: CO2 emissions per dollar of GDP have declined in recent decades (see Chart E/), as has energy intensity (units of energy per unit of GDP). Though it remains low, the share of renewables in the global energy mix is climbing.

Investing as a rational optimist

The world is changing – but is our investment approach changing with it? Rational optimists should consider the following:

For investors, it is therefore important to invest in a better world. This need not mean missing out on profits. It is striking how “ESG” (Environmental – Social – Governance) criteria have become more important to investment decisions in recent years. The ESG criteria are a growing and evolving catalog of investment criteria that help to direct funds into investments that value environmental protection, good working conditions and good corporate governance. This approach, long used by institutional investors, is steadily gaining importance among individual investors, too – especially with the trend toward integrated ESG among investment professionals/strategists. The ESG criteria are no longer regarded as a category used to exclude investments, but as an integral part of analysis and security selection. Academic studies have shown that this need not be to the detriment of investors.

There are plenty of reasons for “rational optimism.” Things are often better than we think.

Hans-Jörg Naumer is Global Head of Capital Markets & Thematic Research with Allianz Global Investors which he joined in 2000. The focus of his work is on analysis relating to strategic and tactical allocations, specific investment opportunities and the identification of long-term investment trends. Before joining the firm, he worked for Société Générale, where he became the Head of Research Germany and was part of the French investment bank’s international research team. From his vantage point as an analyst and economist, he observed the establishment of the Economic and Monetary Union and thus ranked among the prime “ECB Watchers”. He started his professional career in the corporate banking division of Deutsche Bank in 1994. Hans-Jörg studied economics at the University of Mannheim, one of the leading universities for economics and business studies in Germany. During his studies, he worked at the Chair for Macroeconomics. 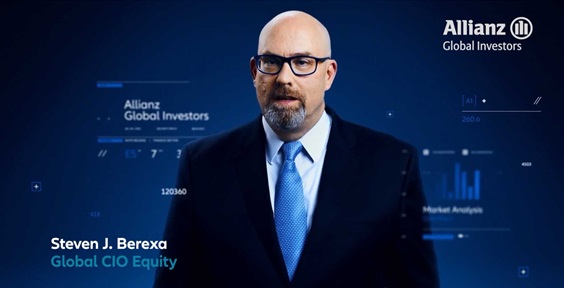 Our capital market implications give you a brief summary of the baseline macroeconomic scenario. In our world map of political risks, we also take a look at existing and potential hot spots.