When fears of the new coronavirus seized hold of markets in early March, already low government-bond yields fell to record levels amid a historic “flight to quality”. Given the impending global recession, government bonds will likely continue to be attractive for now – although their yields will be low and liquidity concerns will make them volatile. But over the long term, we favour spread products such as investment-grade and high-yield corporate bonds.

As the extent of the global coronavirus crisis became clear in recent months, we made some adjustments to our outlook for global bond markets. However, our core convictions remain the same: (1) interest rates will likely remain low in the near term; (2) bond returns are set to stay low for years; and (3) we still prefer spread products to government bonds in the long run.

There are compelling reasons for us to think interest rates will remain at or near their current very low levels for some time. The trend was apparent over recent years, even before the coronavirus hit: central banks have repeatedly showed their willingness to loosen the reins in the face of economic headwinds. And indeed, with a coronavirus-triggered global recession looming, major central banks have lowered rates dramatically, increased their bond purchases and provided additional liquidity provisions to stabilise markets.

Even if the outlook for global economic growth improves – which is unlikely to happen in the near term – we don’t anticipate any imminent change in the monetary policy of the two most important central banks (the US Federal Reserve and the European Central Bank). If anything, we expect them to make additional rate cuts or extend their bond-purchase programmes further. As central banks and investors alike buy up government debt, their yields could fall even more.

When considering the future direction of bond yields, it’s also important to note the relationship between high debt levels and low rates. Decades of “loose” monetary policy – including low rates – have lifted public and private debt levels close to record highs globally (see charts). One reason this has happened is the financial appeal of taking on cheap debt – including when corporations use it as leverage to buy back their own stocks. High levels of debt have historically curbed countries’ longer-term economic growth, while making their central banks reluctant to raise interest rates to a “normal” level for fear of hurting a private sector dependent on low financing costs. Clearly, the environment that central banks helped create is not going away anytime soon.

Non-financial and government debt levels are near record highs
ebt/GDP in % (developed markets on left, emerging markets on right) 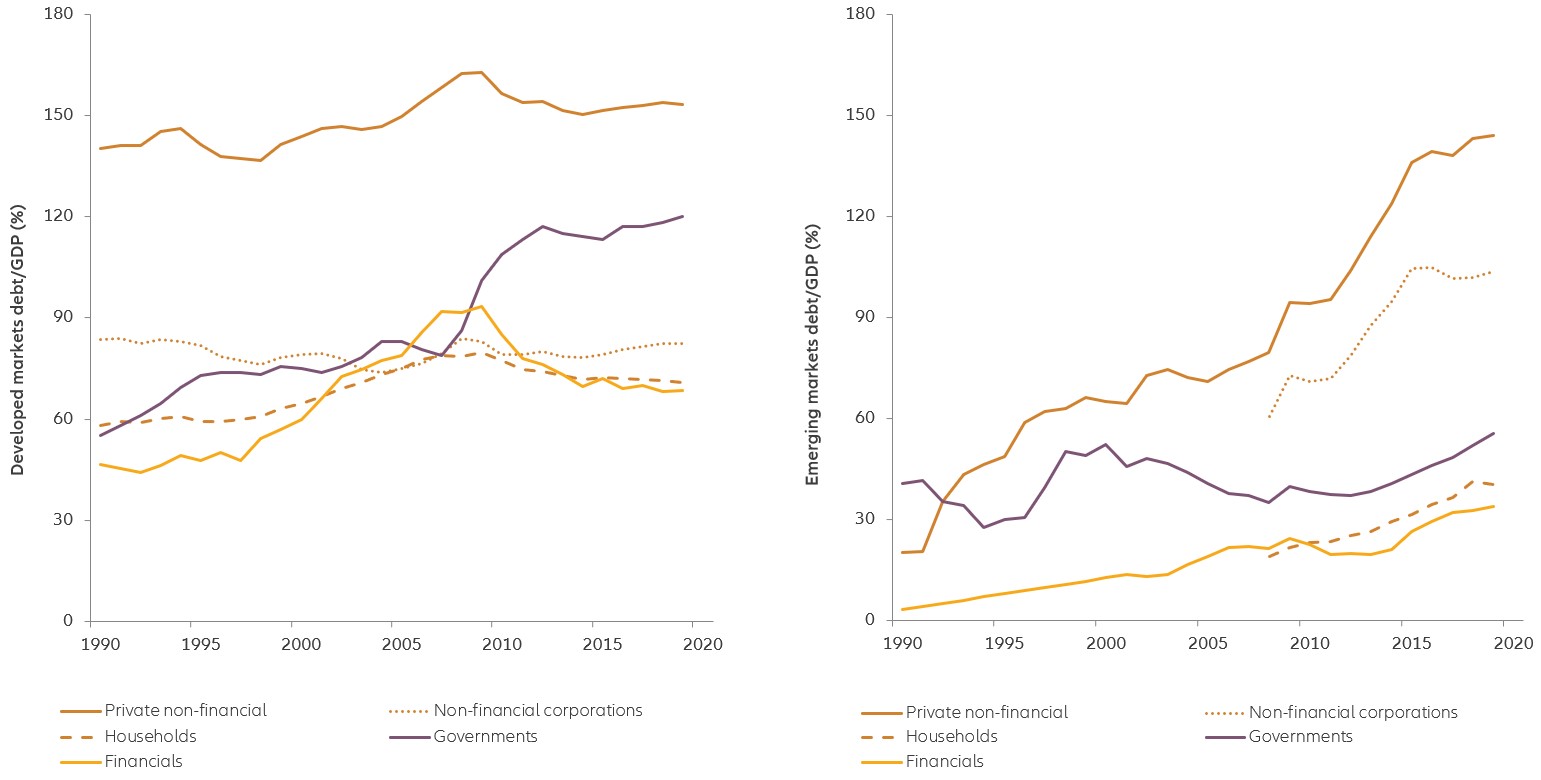 2. We expect low bond returns over the long term

In our view, there are two reasonable outlooks for bonds: yields will fall even lower, or yields will rise slightly but still stay low.

Either way, we expect annualised returns on government-bond markets to be in the low single digits. Even in a climate of “normal” interest rates – and we are nowhere near such an environment – central-bank rates would likely rise to only about 3% in the US, 2% in the euro zone and less than 1% in Japan due to low trend growth. At these levels, US debt would likely be more attractive than that of other nations, but it’s unlikely that these low yields would meet most investors’ long-term obligations. 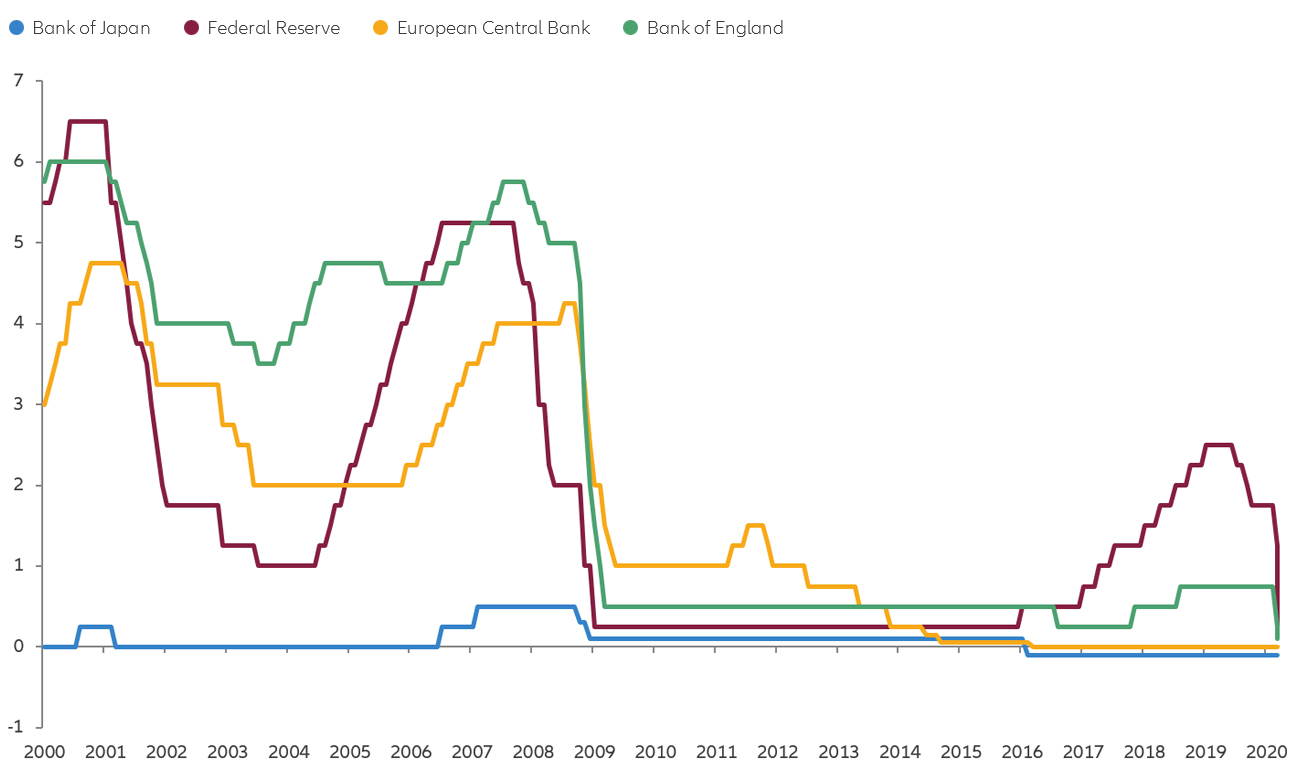 3. We prefer spread products to government bonds in the long run

When yields are low and the economy is not entering a recession, the more attractive segments of the bond market tend to be the ones that offer additional income potential over government bonds in exchange for taking on additional risk. Spread products are a good example: their extra yield potential (or “spread”) is meant to compensate investors for taking that risk.

These are not normal times, however, and spread products as a category may not generate enough income to compensate investors for taking more risks (though proprietary credit research may help mitigate them). However, over the long term, we find credit and illiquidity risk to be worth taking. We estimate that compared with a government bond index, investment-grade corporate bonds could offer additional return potential of around 70 basis points, and high-yield bonds could offer an extra return of 200 basis points. (A basis point is 1/100 of a percentage point.)

The current environment is challenging. Growth prospects are unclear, the coronavirus outbreak is continuing to spread around the world and central banks could still change their monetary-policy approaches. We have seen several bouts of ambitious valuations hit the bond market as investors drove up prices and pushed yields further down. Portfolio decisions should be adapted actively in response to these difficult conditions.

by Mona Mahajan | 6 days ago

20 years into the 21st century, here’s what investors need to know

Mid-year outlook: markets could rise more despite the recession

The financial markets reacted to the coronavirus with an unprecedented first-quarter drop, then turned around quickly. This appetite for risk in the face of the deepest recession since the 1930s is quite unusual, but the markets are being driven by optimism about potential economic improvement down the road – so we can’t exclude a further rise in equity prices.