Is the ECB using a misguided inflation measure?

Inflation can significantly erode purchasing power, but the ECB may be underestimating the true increase in consumer prices by relying on a narrow measurement. Investors may want to ready their portfolios for a higher rate of real-world inflation in the euro zone, perhaps by employing an actively managed mix of equities, real estate and commodities.

But what if the ECB’s obsession with disinflation (a decreasing inflation rate) is flawed because it overlooks a key factor: owner-occupied housing costs? If this turns out to be the case, it could mean euro-zone interest rates will remain too low for too long, and bonds could be exposed to a hidden loss of purchasing power.

Inflation is in the eye of the beholder

Several prominent euro-zone inflation gauges have painted a picture of subdued price pressure for the past 10 years: 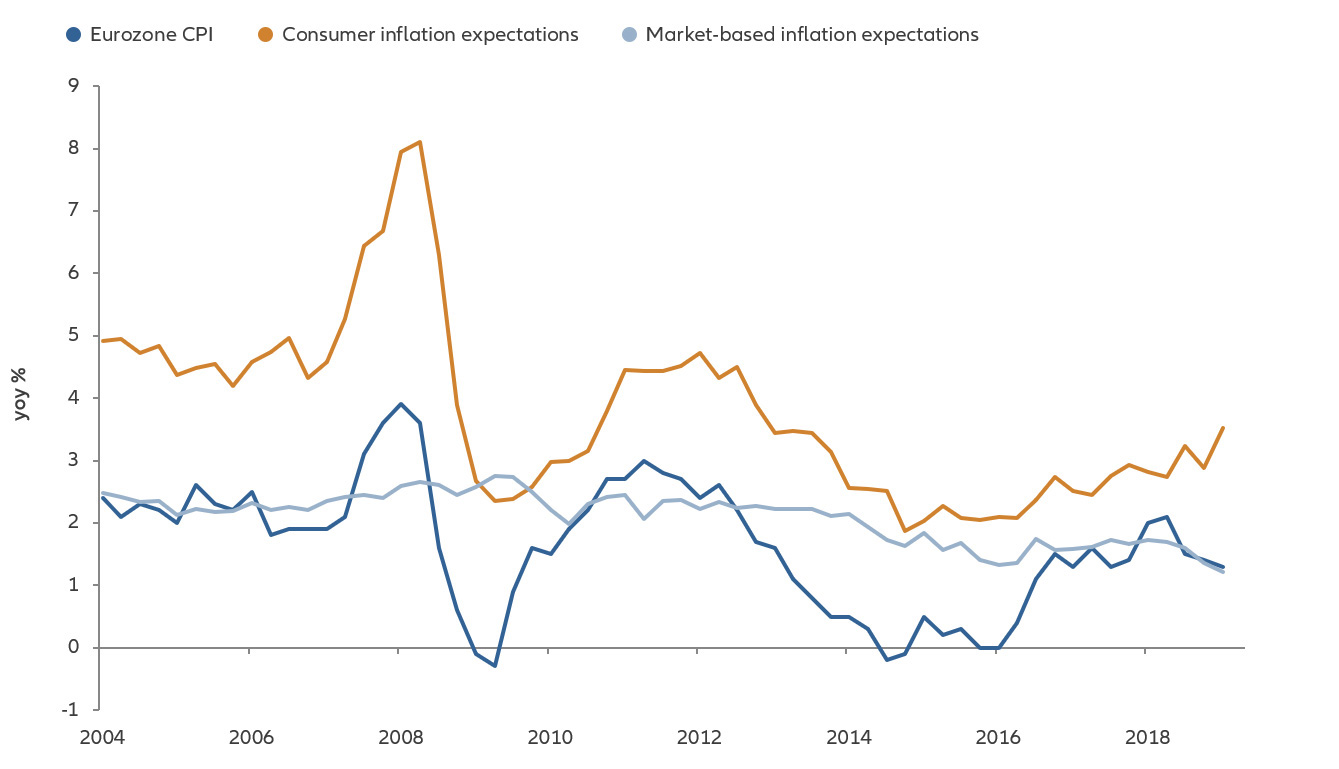 Part of this gap is caused by official price measures underrepresenting lower- and middle-income households, who tend to face higher-than-average inflation due to their consumption patterns. These households tend to spend a higher share of income on “frequently purchased items” like food, beverages and fuel, which are likely to be subject to stronger price increases. However, additional factors may also be at work.

The most important reason for a potential underestimation of real-world price pressure by the HICP has been that it does not factor in owner-occupied housing costs. Compared with many other countries, most notably the United States, these and other housing costs in the euro-zone index appear significantly underrepresented (see Chart 2).

Source: US Bureau of Labor Statistics, Eurostat. Data as at August 2019.

Why are housing costs being excluded? The European Commission (EC) reviewed this topic in 2018 and – with the full backing of the ECB – cited two major factors:

We believe the EC’s reasons for excluding owner-occupied housing from the HICP are questionable – and they can still be addressed:

Inclusion of owner-occupied housing (OOH) costs – which rose by 3.4% year-over-year in the first quarter – would have significantly lifted the recent euro-zone inflation trend (see Chart 3). Assuming the same share as in the US consumer price basket, headline HICP inflation would have run at an annual rate of 1.9% instead of 1.4%. In addition, the core rate in March 2019 would have been 1.6% instead of 0.8%. 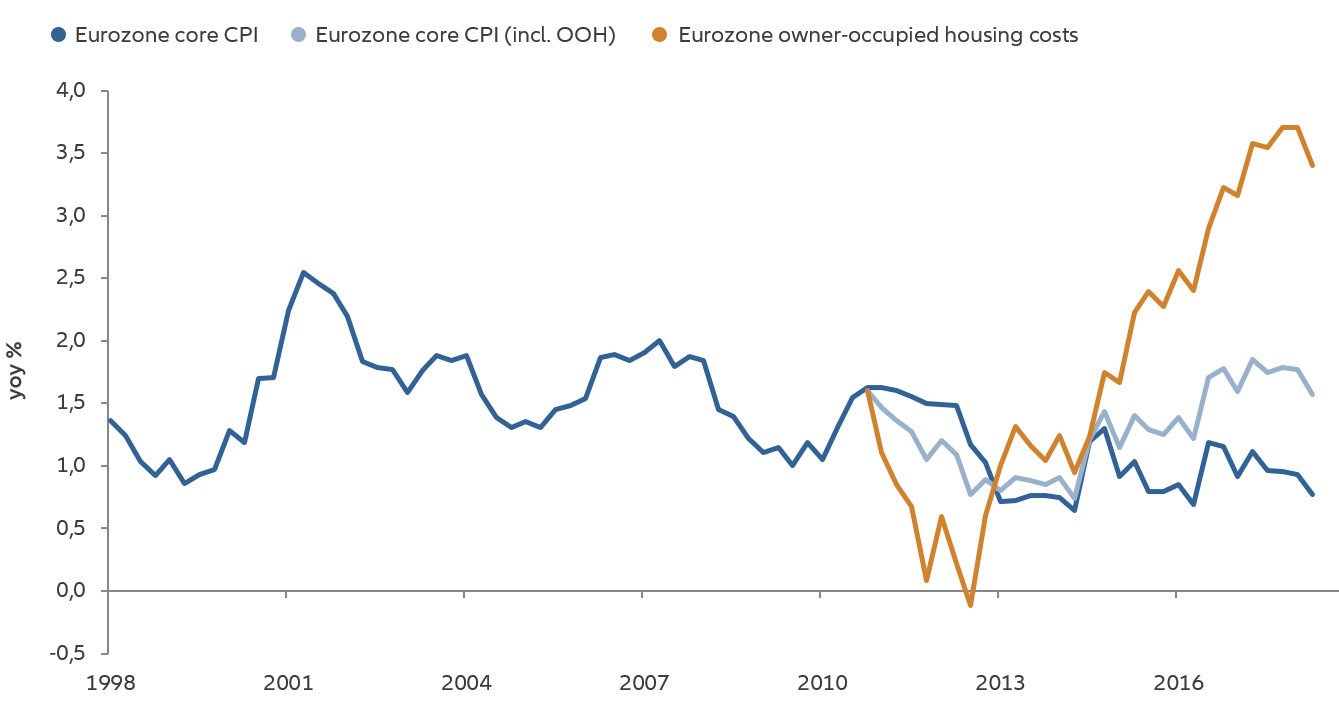 Aside from housing costs, other factors may have contributed to the understatement of euro-zone inflation. For example, many durable goods have shorter life spans (a negative quality effect results from higher obsolescence), and items such as apparel undergo frequent fashion changes that can distort their prices. Eurostat has been ignoring these factors, which would otherwise have lifted inflation. At the same time, Eurostat has been accounting for other factors – such as quality-improvements – that dampen inflation.

While the appropriate weight is certainly up for debate, it is clear that completely excluding OOH has pushed down official measures of consumer inflation. For example, one of the things that has puzzled economists is that inflation in the euro zone hasn’t risen as expected given the lower levels of unemployment. This can be measured by the price Phillips curve – the relationship between labour-market slack and inflation – which has been surprisingly flat. The inclusion of OOH costs would go a long way towards explaining that phenomenon (see Chart 4).

Chart 4: euro-zone price Phillips curve
Not as flat as it seems if homeowner shelter costs are included 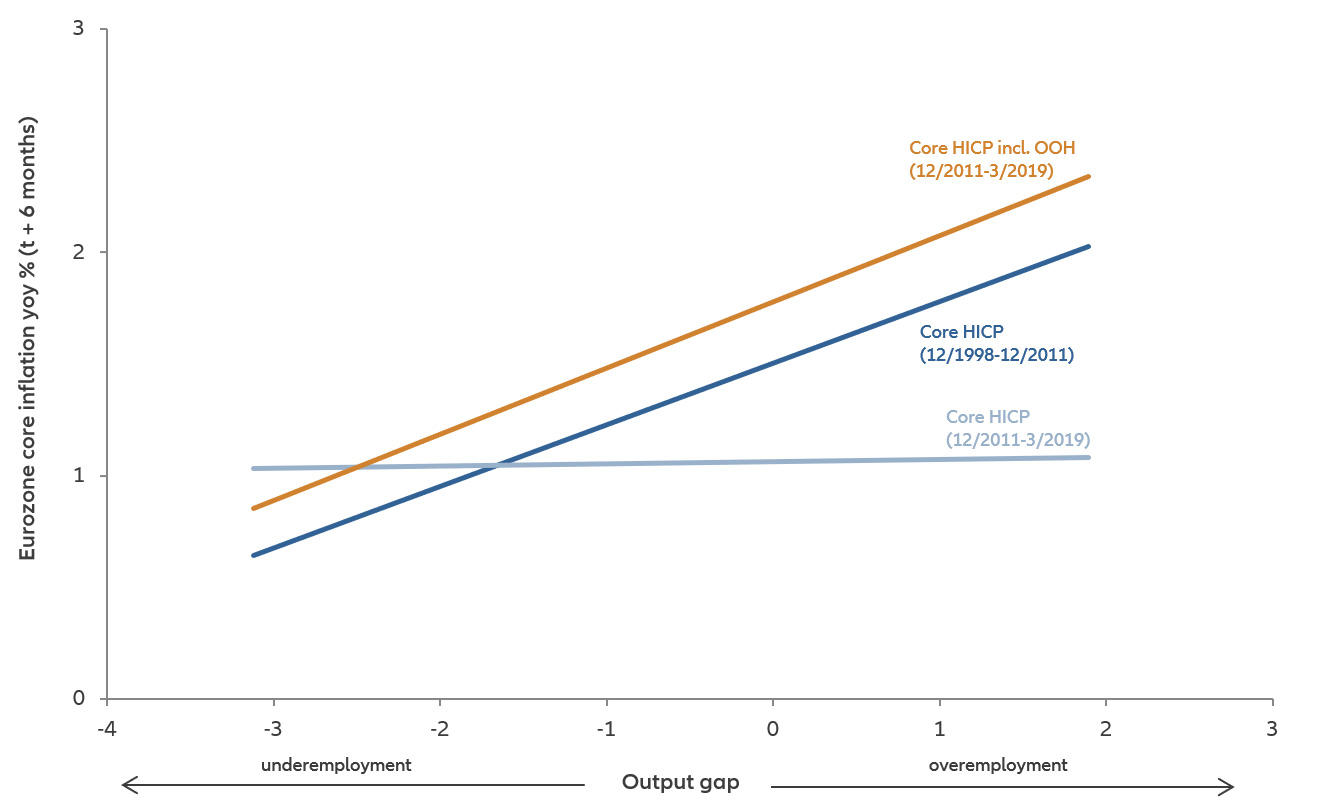 The reliance on a narrowly defined and downward-biased inflation measure has contributed to the ECB adopting its ultra-expansive monetary policy with real-world impacts. Deposit rates are negative, and over the last five years there has been an unprecedented flood of liquidity from quantitative easing.

But worryingly, by maintaining this expansive stance, policymakers may have missed the opportunity to regain some wiggle room by starting to normalise policy. Moreover, the ECB’s reluctance to move away from its monetary-crisis mode has severely undermined its credibility and independence. This has given rise to fears of fiscal dominance, where monetary policy will be increasingly subordinated to fiscal-financing requirements.

More subtly, by repeatedly drawing attention to low consumer price pressures and undershooting its price stability target, the ECB has helped erode longer-term inflation expectations of investors and economists. This has raised the risk that a more general disinflationary mindset could become a self-fulfilling prophecy over time.

The answer may be for the ECB to adopt a more inclusive inflation approach, which would help the central bank to do two important things:

The understatement of “true” inflation by official price measures is having far-reaching repercussions for investors, since bonds and other nominal assets could be exposed to a hidden loss of purchasing power. This “stealth devaluation” could aggravate the negative effects of financial repression, which helps governments reduce their real debt burdens but hurts savers.

Accordingly, investors should consider making an appropriate strategic allocation to an actively managed blend of real assets such as equities, real estate and commodities, which may be able to provide a proper inflation hedge and a means of diversification.

By continuing to focus on the incomplete HICP measure, the ECB faces an elevated risk of missing its official inflation target for several more years, despite running an overly expansive monetary policy. Against this backdrop, investors should be braced for a prolonged period of negative interest rates accompanied by rising financial-stability risks.

For more on this topic, read “The risks of relying on an inaccurate inflation measure” (a more in-depth version is also available) and “The fairy tale of low inflation in the euro area”.

Martin is a Senior Economist and member of Allianz Global Investors’ Global Economics & Strategy team. His main focus is on macro based asset allocation and economic analysis as well as fixed income and FX markets.

He previously worked at Cominvest and Deka as a global fixed income portfolio manager and was Head of Fixed Income and Money Markets at SEB Invest Germany. He graduated with a master’s degree in business administration from the University of Siegen and is a CFA charterholder since 2003.

The ECB is getting its tools ready

Active is: Investing for impact

Impact investing is becoming more popular, but investors keen to get involved should look out for traditional investments mislabelled as “impact”.