3 key themes to shape the remainder of the year

Three factors appear likely to shape the US economy through the rest of 2018: trade tensions, mid-term elections and the Fed’s road to normalisation. In a late-cycle environment marked by the potential for tail risks, investors should take a closer look at small caps, energy, high yield and alternatives.

While volatility and global uncertainty were hallmarks of the first half of this year, we see three themes that could drive the last half of the year: trade tensions, mid-term elections and the Federal Reserve's ongoing normalisation.


US markets set a steady pace

Starting the second half of 2018, US risk assets, despite facing mediocre returns on an absolute basis, have demonstrated robust relative performance. The S&P 500 Index, one of the few global equity markets with returns in the green, was up 1.7% after the second quarter of 2018. (See Exhibit 1.)


Exhibit 1. There’s plenty of good in seeing green
US equity market returns (year to date) have been robust relative to their global peers. 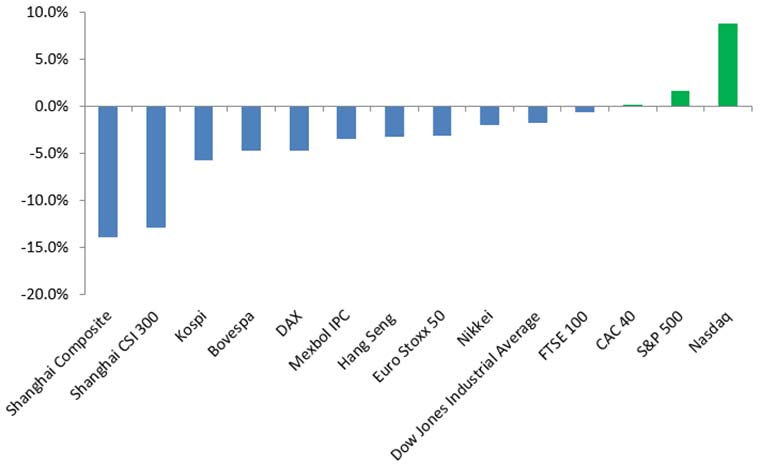 
And this resilience runs beyond equity markets: the US dollar has strengthened, US high-yield bonds have moved upward, US Treasuries are starting to reverse higher and, notably, US small caps, as represented by the Russell 2000 Index, are outperforming the S&P 500 by nearly 6% for the year.

The positivity around US risk assets began as the global growth story faded somewhat earlier this year, particularly as economic momentum stalled in Europe and for some emerging-market countries. While economic momentum now seems to have stabilised abroad, escalating trade tensions have once again increased global uncertainty as markets in Asia decline on tariff and inflation fears. However, the US economy remains relatively closed, with 70% of GDP coming from consumption (and only 12% of GDP from exports), which continues to be a boon for US small-cap companies. In addition, as the Federal Reserve (Fed) confirmed its normalisation course, indicating four potential rate hikes in 20182 compared to a more gradual path reaffirmed by global central banks, risk assets like the US dollar continued to strengthen. (See Exhibit 2.)


Exhibit 2. The greenback continues to build muscle
The US dollar has been outperforming developed-market currencies, including the Chinese renminbi.


As we enter the second half of 2018, we are now watching several key markets and events, and are particularly focused on three areas:

Trade tensions with China have escalated and continue to be a source of uncertainty for markets. While the implemented tariffs are, thus far, not economically significant (the USD 34 billion implemented on both sides as at 6 July amounts to less than 0.5% of either economy), the risk of escalation remains a looming unknown. If the US administration pursues close to USD 400 billion in tariffs, for example, China could retaliate, and perhaps use strategies beyond tariffs on US imports, which only amounted to USD 130 billion in 2017. While this is certainly a risk, we see the sell-off in Chinese equities, combined with recent statements from the Chinese government around intending to keep its currency stable, as indications that China does not prefer a trade escalation or other retaliatory measures.

As we continue through 2018, we see the US mid-term elections on 6 November as critical to the market path. Historically, the period before mid-term elections has been volatile for markets, and the period afterward has been robust, regardless of party winners, as marketplace uncertainty is lifted. We see the potential for a strong year-end in the markets as well, particularly as we would continue to gain clarity around policy and the current administration. Furthermore, sidelined bipartisan issues such as infrastructure reform could re-emerge as a focus area as we get closer to mid-term elections, which may also boost market sentiment.

The Federal Reserve is on a normalisation path

Even if we remove trade tensions and politics, one key driver of the US economy over the next 1-3 years remains: the Fed. The Federal Open Market Committee has been clear that it intends to continue its normalisation path, with its median “dots” now indicating four rate hikes in 2018, pushing the US economy toward a later-cycle stage. With the fed funds rate moving higher and the Fed balance sheet shrinking, the Fed is removing liquidity from the financial system; the implications for this include elevated volatility and limited multiple expansion in equity markets. In addition, we have seen the yield curve continue to flatten, approaching multi-year lows. (See Exhibit 3.) (Although our analysis shows that a flat or even inverted yield curve is not uncommon towards the end of a Fed tightening cycle.) And while the inversion of the yield curve is historically a recession indicator, we typically do not enter a recession until 6-18 months after inversion has occurred. Nonetheless we continue to monitor Fed movements and the downward trajectory of the yield curve as part of our in-house late cycle monitor.

Exhibit 3. Is the yield curve riding down a one-way street?
The yield-curve has moved in one direction over the past five years: down.


How the rest of the year may unfold

Overall, we believe that the S&P 500 Index should offer positive returns for the year, albeit with more volatility and below the 20% return we saw in 2017. We continue to see this as a peak year in terms of the economy and earnings, with US GDP approaching 2.9% and S&P 500 earnings topping 20% in 2018. As a result, certain themes that have been working this year – small-cap stocks, energy and high yield – all could have legs, particularly as we approach a potentially robust year-end period.

However, we remain more cautious as we head into 2019 and beyond, as we are clearly approaching a more late-cycle environment that is driven by the Fed and fraught with new and emerging tail risks. We encourage investors to remain diversified, active and consider increasing exposure to uncorrelated assets where possible.


Four to watch
Looking ahead, these opportunities could help power portfolios:

US small caps may have legs

This area of the market has had strong first-half performance, and we believe it continues to have potential as we round out the year, particularly if trade rhetoric remains ongoing, which seems likely over the near term. In addition, tax reform benefits should also lift small caps over the next several quarters.

Energy can pick up late-cycle steam

Historically, commodities tend to perform well in a late-cycle, above-potential growth environment. Given the positive supply-demand fundamentals of the energy sector, combined with the notable underperformance of energy stocks versus actual oil prices, investors could see continued outperformance in the sector.

The high-yield market, particularly lower-rated segments, has performed well during the first half of the year. Given that we do not see a recession or substantial default cycle on the horizon, higher-quality high yield could remain attractive this year considering the relative carry and still favourable technical outlook. High yield is also an area where investors may benefit from active management, given the idiosyncratic nature of the bonds and the attractive opportunity for out-of-index positions.

As we approach a late-cycle environment in the US, we continue to feel that investors could benefit from gradually increasing exposure to alternative assets, including private credit, infrastructure debt and equity, and absolute-return opportunities. These types of investments tend to be less correlated to equities over time, and thus provide an additional source of diversification and potential protection for a portfolio.


The material contains the current opinions of the author, which are subject to change without notice. Statements concerning financial market trends are based on current market conditions, which will fluctuate. References to specific securities and issuers are for illustrative purposes only and are not intended to be, and should not be interpreted as, recommendations to purchase or sell such securities. Forecasts and estimates have certain inherent limitations, and are not intended to be relied upon as advice or interpreted as a recommendation.

Trump turns the tables on trade

How will this economic Goldilocks story end?

Burdened by too much debt and growing societal frustration, the global economy is faced with stark choices, including fiscal austerity and rising defaults. But what if we took a page out of Henry Ford’s playbook, creating a highly paid, highly trained workforce to help usher in a new era of inclusive growth?