Will the US risk rally endure – and can cyclicals continue to lead?

With equities rallying more than 30% since late March, driven most recently by cyclicals, financial markets were perhaps due for a period of consolidation. New risks could emerge, but we continue to believe in the ongoing economic re-opening story – so cyclical sectors may remain market leaders in the near term. Markets could be supported further as elevated levels of cash are put back to work.

Risk assets have rallied since their 23 March lows, and the stellar May US jobs report released in early June provided yet another upside surprise. Non-farm payrolls were up 2.5 million versus an expected 7.5 million decline – a figure that sparked further market optimism.

The market’s reaction to this report also helped confirm the rotation in US markets that has been underway since mid-May: a pivot towards cyclical “laggards” (such as industrials, financials and energy) and away from the “winners” that fuelled the early part of the rally (such as technology, consumer staples and healthcare).

But after digesting the surprising jobs report figures, the markets seemed to undertake a period of consolidation driven by two factors. First, there is a general view that markets went up too far, too fast – perhaps ahead of fundamentals – and were overdue for a correction. And second, there has been an ominous rise in coronavirus cases and hospitalisations in certain states in the US.

Our view is that this broadening of the equity rally to include cyclical sectors was healthy, and that the virus outbreaks will be managed on a regional basis – without another shutdown of the entire US economy. As a result, as the economy re-opens, we expect select cyclical sectors to continue performing well in the near term, as the performance gap between the winners and laggards remains high. Longer term, we favour increasing tactical exposure to our ongoing secular growth themes as well.

What could spark a further rally in risk assets?

While periods of consolidation are natural, the risk rally may well resume once again. We will be monitoring both fundamental factors (including health developments and economic activity) and technical factors (which primarily revolve around market data) to identify renewed appetite for market risk.

US equities have outperformed their global counterparts 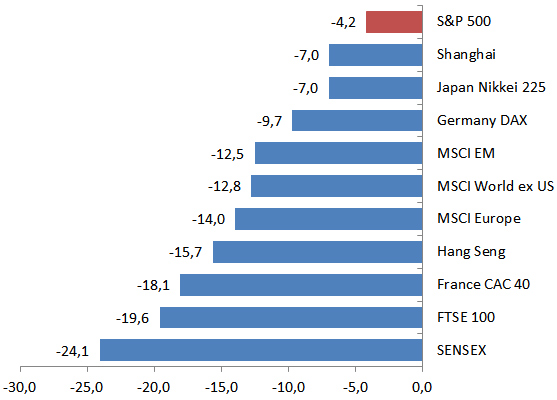 What are the risks to our outlook?

While there is reason for optimism, we are mindful of looming risks that could cast a shadow on our outlook.

How should investors position portfolios for the road ahead?

As noted above, we continue to see opportunities in cyclical stocks in the near term, but we still think secular winners are attractive on a long-term horizon (three to five years or even longer), and investors should consider adding exposure here on a more tactical basis when there are pullbacks and opportunities. Some sectors we favour on both sides are highlighted below.

Consider the cyclical sectors tied to the “reopening”
Some of the more compelling risk-reward today may come from under-loved cyclicals, both in the US and globally:

Maintain exposure to key technology sector themes
We continue to prioritise secular growth themes in technology, particularly those parts of the tech sector that lend themselves to a longer-term “stay-at-home” world. These include wifi and 5G services, virtual access through the likes of remote education, video conferencing and e-gaming, and corporate IT infrastructure – such as cyber-security and cloud computing – to support a “work-from-home” workforce.

Healthcare and consumer sectors remain critical
As we re-emerge from the pandemic, healthcare and consumer staples companies will play a critical role for consumers worldwide. In addition to those companies involved in the development of medical therapies and vaccinations, we would prioritise testing and devices, telemedicine – including the remote monitoring of patients and diagnostics. Consumer “winners” could include food delivery companies, digital grocers and omni-channel retailers, as well as home improvement players.

Opportunities across fixed income
Finally, we also see opportunities across the spectrum in fixed income, particularly as the Federal Reserve stimulus programmes have supported credit markets in both the investment-grade and high-yield space. On the more defensive side, we favour areas like high-quality investment-grade, US Treasury and US dollar assets. We would also look to add risk in areas like select high yield – including short-duration and “fallen angel” strategies – convertible bonds (which offer upside via equity options) and select Asian high yield.

Data is sometimes called the “new oil” given its integral role in the functioning of the world’s economy. But how safe is this data? As more business activity and social interaction moves online – particularly in the wake of the coronavirus pandemic – companies’ approach to cyber security is being scrutinised. Through a dedicated engagement programme, we’re helping to influence companies’ policies and best practices in this area.