Rising demand for healthy, high-end protein is fuelling a surge in fish consumption. While farmed fish can meet this demand and one day potentially offset the need to catch wild fish from the oceans, salmon farming, still has a number of major sustainability challenges like parasites and organic waste that threaten entire ecosystems. Find out how land-based aquaculture can present an opportunity to meet rising demand, and resolve environmental problems.

Eating fish often feels like we are making a better choice. Typically, fish has less saturated fat than meat, and a wider range of beneficial compounds like omega 3 oils, said to reduce cardiovascular disease. In a restaurant, we might console ourselves that the higher price tag means we are tucking into a dish freshly caught and prepared locally. The more sustainability-minded among us might also consider the fish’s favourable carbon footprint compared to a similar portion of beef, pork or chicken.

On the face of it, fish is indeed superior to meat from a sustainability perspective. In the wild, herbivorous fish consume algae, and are in turn eaten by their carnivorous counterparts. The process requires no deforestation for grazing, no otherwise productive land is given over to producing feedstock, and no chemical interventions are required in order to grow or maintain supply. However, harvesting fish at an industrial scale has clear environmental consequences. These range from overfishing, to ecosystem destruction and of course, plastic pollution from fishing equipment. According to Greenpeace, socalled ‘Ghost Gear’ accounts for 10% of all plastic ocean pollution.1

How fish farming addresses the shortcomings of industrial fisheries

Fish farming or ‘aquaculture’ presents solutions to some of these problems. The most commonly farmed fish are carp and tilapia, both grown in fresh water, inland. Salmon, the most valuable aquaculture species, are farmed in coastal marine waters. As with wild fish, no forests have been lost. And, while grain is fed to farmed fish, the conversion of those grains into proteins is more than 5X more efficient than beef.2 This superior ‘Feed Conversion Ratio’ means far fewer resources are used in the production of fish vs. beef. Consequently, the advantages are economic as well as environmental.

The consumption of fish has accordingly skyrocketed. Partly, this is due to a surging global population, with the world expected to reach 9 billion inhabitants by 2050. However, according to the United Nations Food and Agriculture Organisation (FAO), the global consumption of fish has increased at twice the rate of population growth since 1961, at 3.1%3 p.a. Absolute demand for protein has thus been reinforced by rising average incomes, with perceptions of health and status meaning that fish consumption has outpaced the growth of all other animal protein foods.4

Aquaculture has stepped in to meet this demand. As the FAO chart below shows, the volume of fish caught by traditional methods has flatlined since the mid-1990s, while fish farms have boomed. Yet despite its advantages compared to both catching wild fish and meat farming, aquaculture is not without its issues. 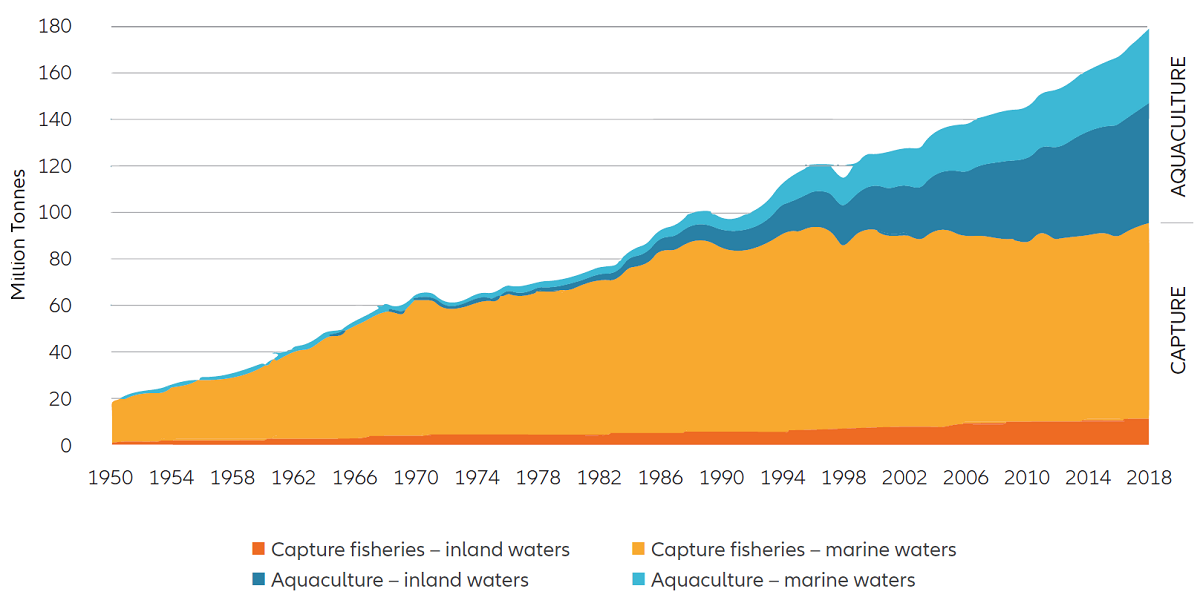 Salmon makes up around 5% of all farmed fish consumed globally, equivalent to 2.4 million tonnes each year.5 By revenue, salmon and related species, account for almost 20% of the entire global fish trade.6 The sheer scale of this particular subsector has therefore made it impossible to ignore.

Farming salmon creates three main problems. Chief among these are parasitic sea lice. These crustaceans are transferred from wild fish onto healthy salmon, feeding on their skin and blood. As with lice in human populations, high density fish farms make for rampant infestations, and in extreme cases mass mortality.7

In trying to solve this however, farms have created a new setback: treating sea lice requires the use of harsh chemicals. Over time, the lice have evolved to build up a resistance, necessitating the use of ever harsher treatments. These chemicals are then combined with antibiotics to treat other diseases, impacting the health of both the farmed salmon and – as they wash out to sea – the surrounding ecology.

This relationship between density and surroundings is also at the heart of issue number three: effluent. Like cows, sheep or any farmed animal, salmon generate excrement. Without proper disposal, the organic matter can build up to levels which destabilise local ecosystems – a process known as eutrophication. As nutrient-rich effluent collects, algae build up and decompose, acidifying seawater and ultimately lowering oxygen content. The result is an acidic, low oxygen environment unsuitable for marine life.

These consequences have attracted the attention of national and international regulators:

A combination of adverse environmental impact and ever-tighter regulation is thus helping to create an existential crisis for the industry. On the one hand, surging sea lice infestations are leading to fewer fish successfully making it out of each farm. At the same time, operators face tighter restrictions and increased costs as a result. Even as global demand for salmon surges, supply is being constrained by the industry’s very existence. The result has been a steady rise in global salmon prices since 2004, with particular volatility over the last five years.

Land-based salmon farming offers a potential resolution. Adult salmon are cold water, marine fish, typically found in Scottish lochs or Norwegian fjords. As such, salmon farms have historically needed to be in locations as similar as possible to the fishes’ natural habitat, with all the associated fallout. Once caught, the fish must be frozen and transported, often by air so as to prevent spoilage, to their eventual destination for consumption. An innovative technology known as Recirculating Aquaculture Systems (RAS) means this is no longer the case. 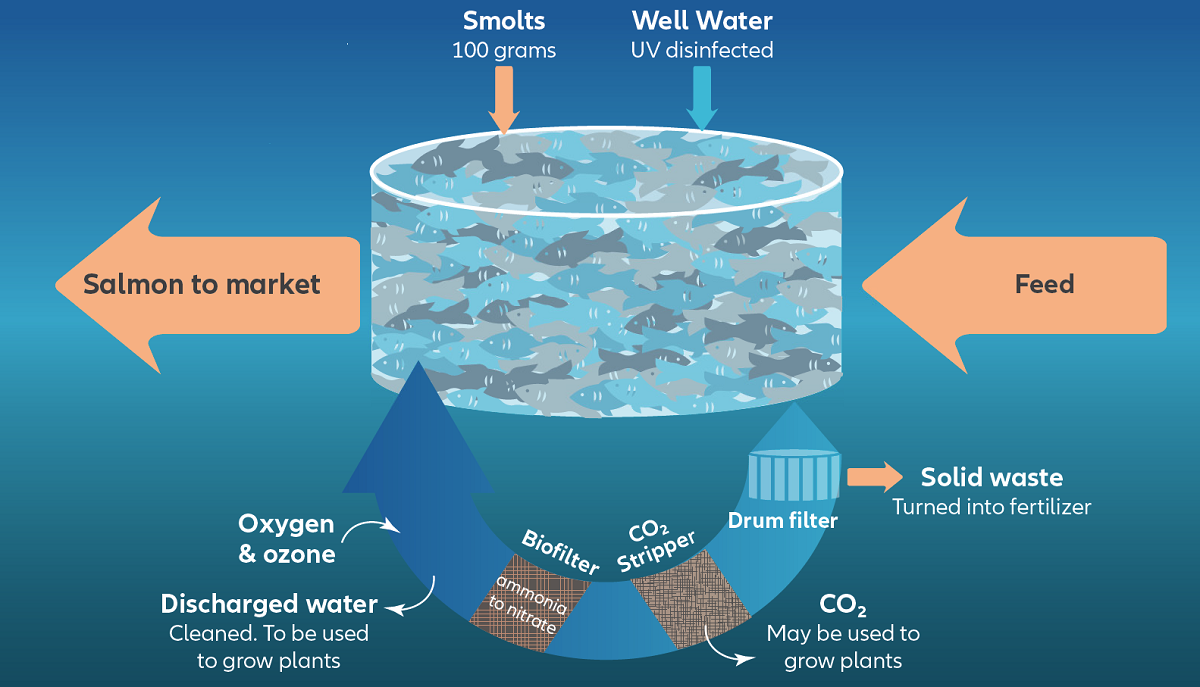 RAS allows salmon to be kept in large indoor tanks, with every element monitored and controlled. This ranges from temperature, to lighting, waste products and even artificial currents. From an environmental perspective, the closed-loop system means effluent can be removed, treated, and disposed of safely, while also eliminating any exposure to seaborne parasites or disease. Lastly, the water itself is purified and reused. While the technology itself isn’t new, it is only the combination of rising prices and industry pressures which have conspired to make it commercially viable.

We look for companies that are providing long-term, sustainable solutions to the planet’s ever-growing demand for nutrition. For example, a Norwegian company has indoor farms in two of the world’s largest salmon markets. Sites in Denmark and Florida not only address the industry’s environmental challenges directly, but also bring products closer to the point of consumption. This means products are fresher, while transportation costs and associated emissions are lower.

These environmental benefits go hand in hand with financial advantages. The RAS closed loop naturally lowers the incidence of parasites and disease, in turn reducing fish wastage and the need for costly chemical treatments. At the same time, retaining effluent within the RAS creates a smaller environmental footprint, minimising the likelihood of costly remediation at the hands of regulators. Indeed, far from a potential cost, effluent can become a new revenue stream. Properly treated, fish excrement can be used as a fertiliser, producing income and further improving agriculture’s contribution to the environment.

Firms focusing on the concerns of environmentally conscious consumers

Looking forward, the economics of salmon supply and demand are expected to continue as global populations and average incomes rise. And while the upfront costs and technical challenges of land-based farming may be higher, the daily operational expenses are lower thanks to automation and lower mortality rates from disease. Consequently, demand should be further bolstered by increasingly environmentally conscious consumers. A Florida-based facility currently produces 9,500 tonnes of salmon each year, and plans to deliver 23 times that amount by 2031, equal to 41% of current US annual salmon consumption.

An attractive business model thus demonstrates how addressing a sustainability challenge directly can present meaningful commercial opportunities. More broadly, it encapsulates how an industry upon which we are increasingly reliant, is being forced to innovate for its longer-term survival. As investors, we are uniquely placed to help shape these transitions for the benefit of our clients and society as a whole.

Preparing for the reference rate change

An inflection point for sustainable investing

China’s bond markets have historically been underutilised by many foreign investors, but things are changing. Steady reforms, an increasingly internationalised currency and attractive yields are resulting in increased inflows. Read these nine tips to understand the essentials of investing in China’s fixed-income marketplace.