The US mid-term elections on 6 November resulted in a divided Congress – commonly referred to as “gridlock” – that has several economic implications:

Some expected results, some surprises

At the time of this writing, the Democratic Party has won a majority in the House of Representatives, though some elections are unresolved. Democrats won 221 of the 435 seats up for election, flipping 27 seats from Republican to Democrat (with 16 races still undecided). Meanwhile, the Republican Party maintained control of the Senate, winning 10 of the 35 seats up for election (with 4 left undecided) and bringing the total number of Republican seats to 51 out of 100 (likely extending to 53 seats).

Other notable aspects of the 2018 mid-term election race include:

One of the biggest takeaways from the elections is that a Democratic House now provides some checks and balances to a Republican president and Republican Congress – or at least more vocal opposing views.

While the Democrat-controlled House could also increase its focus on legal proceedings related to President Trump – notably ahead of the 2020 presidential elections – we do not ultimately believe Democrats will push for impeachment. Impeachment would require support from two-thirds of the Senate, which is highly unlikely.

There may be certain policy areas that may see a modicum of progress:

Gridlock could be positive for equities. The fiscal stimulus of tax reform and much of the deregulation agenda is already “locked in” and the Democrats may push back on some of President Trump’s trade policy proposals that have weighed on markets. As noted in the accompanying chart, markets historically moved upwards by an average of 12% in the 12 months after elections resulted in a split Congress and a Republican president. 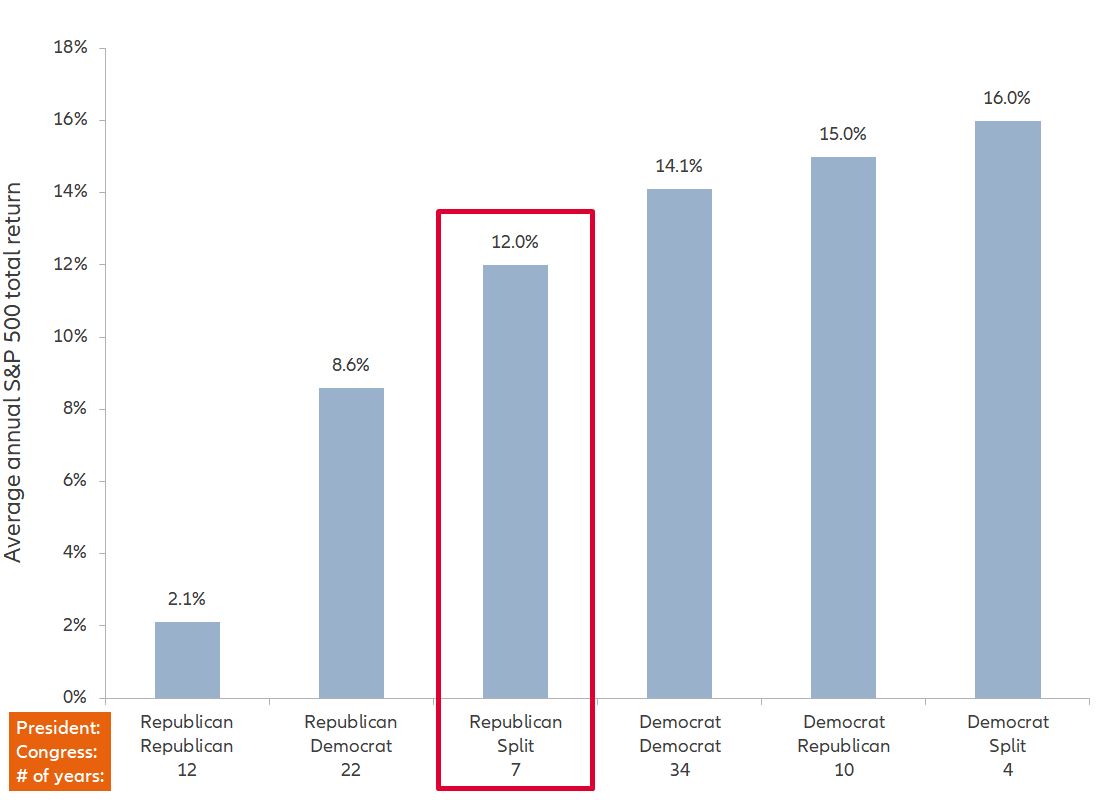 Source: Bank of America Merrill Lynch Research, Allianz Global Investors. Data as at 2017. Past performance is no guarantee of future results. The above graph is illustrative in nature and should not be considered a recommendation to purchase or sell a specific security, strategy or product.


Among the sectors that may fare well:

Among the sectors that may feel pressure:

We believe increased gridlock in Washington will likely dampen investors’ appetite for risk, putting downward pressure on rates. It essentially eliminates the chances of additional tax cuts, and could also portend higher spending and a regulatory environment that is less favourable for business. This would likely reduce the long-term growth outlook and create downward pressure on the US dollar.

Gridlock could give a small boost to developing markets, since the US dollar could soften or stabilise under the policy uncertainty created by a split Congress. The rhetoric from the Democrats may not be as protectionist in nature, particularly with regard to US allies.


What’s next after the elections?

Now that the uncertainty around mid-term elections has been resolved, we believe investors will refocus on the key issues at hand for 2019. Chief among them are the Federal Reserve’s normalisation path, the potential escalation in tariffs in January (or perhaps a positive resolution at the G20 meeting in November), and whether the US decoupling from a softening global economy is sustainable. These may be the primary market drivers in the near future.

The views and opinions expressed herein, which are subject to change without notice, are those of the issuer or its affiliated companies at the time of publication. Certain data used are derived from various sources believed to be reliable, but the accuracy or completeness of the data is not guaranteed and no liability is assumed for any direct or consequential losses arising from their use. The duplication, publication, extraction or transmission of the contents, irrespective of the form, is not permitted. This material has not been reviewed by any regulatory authorities. In mainland China, it is used only as supporting material to the offshore investment products offered by commercial banks under the Qualified Domestic Institutional Investors scheme pursuant to applicable rules and regulations.

If trade tensions continue, the US and China could lock each other out and create their own tech ecosystems, forcing the rest of the world to choose one over the other. With the global economy already becoming less synchronised, investors will need to use greater skill and agility to navigate the markets successfully.