Should you “sell in May and go away”?

Market indicators point to a more supportive environment for investors who once may have been swayed by the seasonal “sell-in-May” strategy. Here are five ways to potentially benefit from today’s climate of strong fundamentals, healthy earnings growth and accommodative monetary policy.

With rising interest rates, slowing global growth and geopolitical tensions emerging from Iran, North Korea and China, investors may be tempted to adhere to the old trading adage, “sell in May and go away”. But is this the right strategy for 2018?

Past returns have paled

Historically there is precedent to support the sell-in-May strategy known to influence investors. Since 1971, 70% of returns for the S&P 500 Index from the seasonal May-to-October period have been anemic, -0.37% versus 11.1% in the remaining six months of the year. (See Chart 1.) 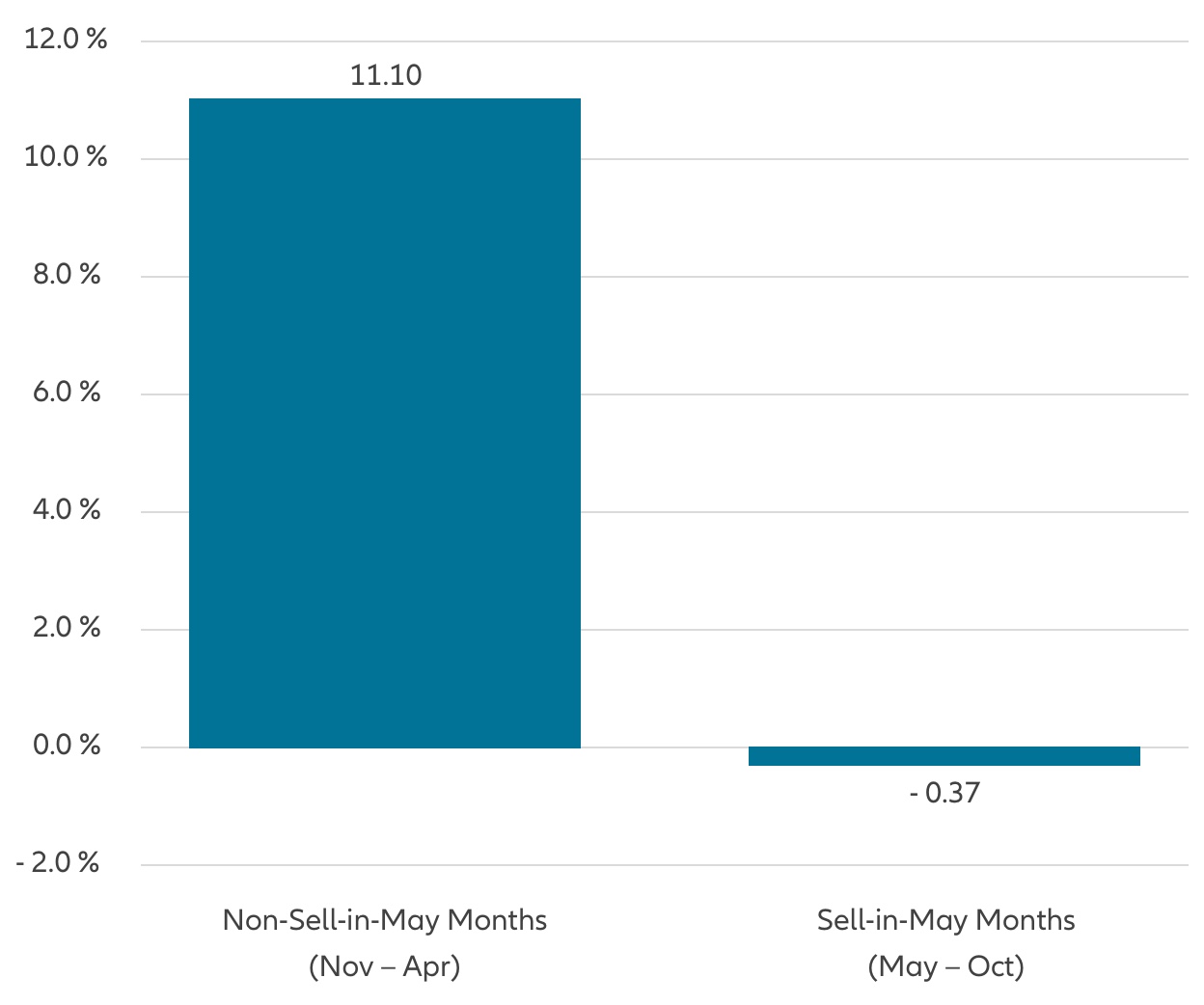 However, investors who generally follow seasonal patterns should think twice this year: markets have already experienced high volatility in the first quarter, and the S&P 500 Index ended the period slightly down (-1.2%). Our analysis shows that there have been eight instances since 1990 where the first quarter of the year had negative average monthly returns for the S&P 500 Index.

What has happened subsequent to a weak first quarter for the sell-in-May periods? Well, in five of the eight instances, the S&P 500 Index returned positive average monthly results in the May-to-October time frame. And the three periods that had negative returns were during recessions (1990, 2001 and 2008). Thus, given the negative first three months of the year, the data seem to be more in favor of an accommodative six months ahead – good news for investors.

More broadly, our view remains that a recession in the US in the next 12 months is unlikely. From an economic and earnings perspective, we continue to see potential peak years, with the S&P 500 Index earnings growth on track for 18%-20% in 2018 and real GDP growth forecasted to approach 2.8%. (See Chart 2.)

Chart 2: Despite a hard start, the year is looking up
Consensus GDP growth points to 2018 as a peak year 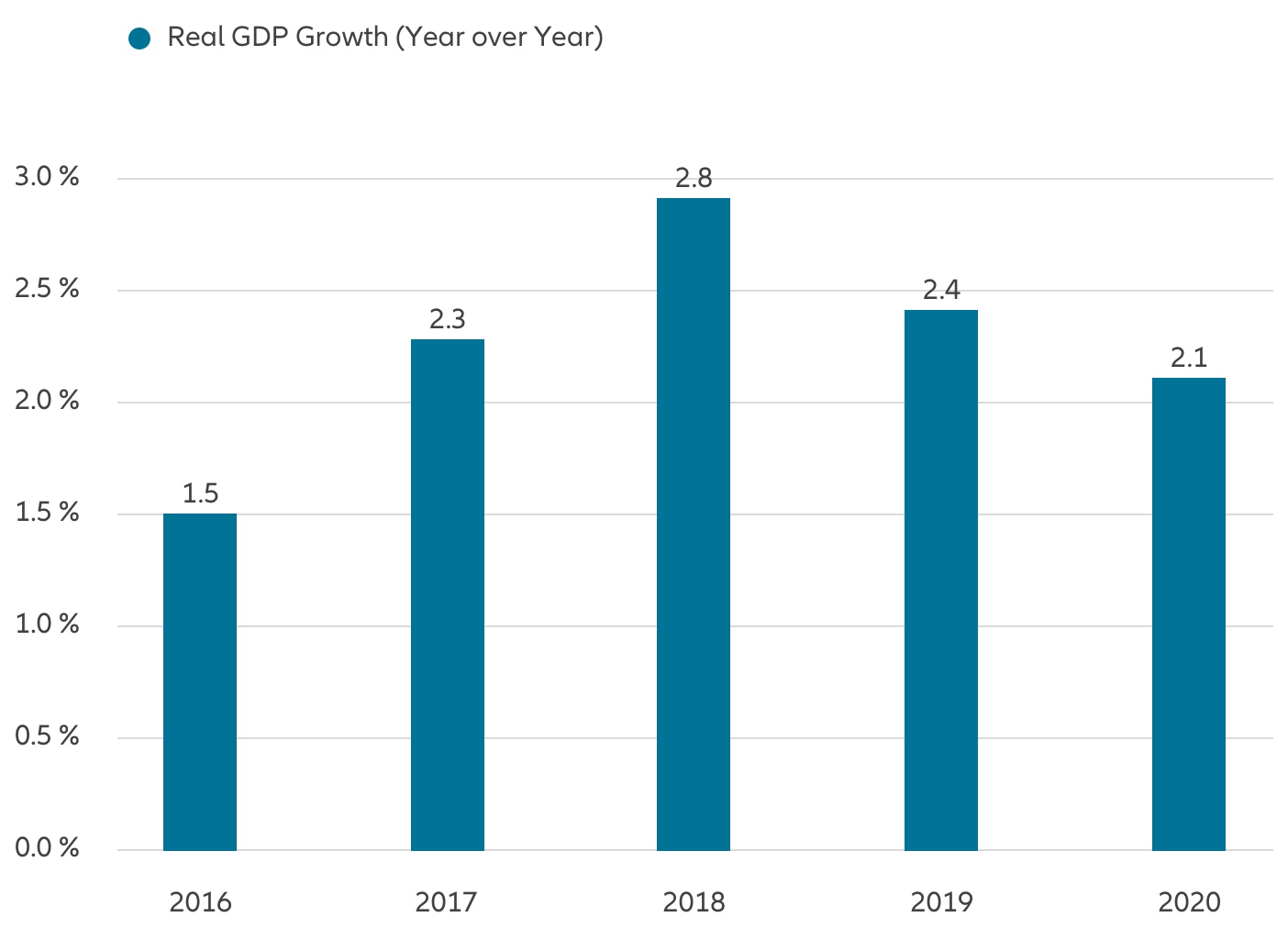 Source: Bloomberg Consensus. Data are as at April 2018.

And while 10-year Treasury yields hover around 3.0%, we have also seen more recently inflation and wage growth that are softer than expectations. This sets us up for a supportive market environment for the remainder of the year. US markets will likely have to climb the walls of worry around slowing global growth, and rising tension around Iran, North Korea and China.

Furthermore, mid-term election years, while certainly causing some volatility prior to November, tend to end on a strong note, as some uncertainty is removed from the marketplace. (See Chart 3.)

Source: Bloomberg. Calculations are for 6 month periods following the date, Jan 1950-April 2017. Past performance is not indicative of future results.

Looking ahead, we continue to see key themes powering the markets:

This year, growth has continued to outperform value, with technology and consumer discretionary stocks showing leadership, despite bouts of volatility. In a late-cycle, potentially inflationary environment, this trend may continue. Our conviction lies with the long-term theme of “winners from disruption”, particularly in the technology and retail space.

Value may have its moment:

We do believe at some point over this cycle certain value sectors will show signs of market leadership; this can happen swiftly and investors should be positioned accordingly. We have already seen the energy sector show strength, given the sharp rise in oil prices; we also believe financials and certain industrial sectors can do well in this environment benefiting from tailwinds. It remains early yet for a rotation into highly defensive sectors such as consumer staples and utilities as signs of recession in the US remain muted.

With rising trade tensions and uncertainty around global growth, it is interesting to see small-cap companies, which tend to be domestically oriented, making a comeback. The small caps have outperformed large caps by 2.2% and are prime candidates for active fundamental investors. (The S&P Small Cap 600 Index is up 1.2% year-to-date as of April 30, 2018, while the S&P 500 Index returned -1.0% over the same period.)

High yield is a bright spot:

Within fixed income, we continue to favor shorter duration strategies, and given we do not see a rise in defaults on the horizon, higher yielding fixed income continues to remain attractive.

Rather than “sell in May and go away,” perhaps the adage should be “diversify in May and sleep better at night.” Remaining diversified, not only by asset class and sector, but also with some exposure to commodities, makes sense particularly in a later cycle market with shifting market leadership. As noted above, while we don’t see a turn in the cycle in the next 12 months, as we get later in the cycle, adding alternative assets to a portfolio such as private credit, infrastructure and real estate may make sense.

Investing involves risk. The value of an investment and the income from it will fluctuate and investors may not get back the principal invested. Past performance is not indicative of future performance. This is a marketing communication. It is for informational purposes only. This document does not constitute investment advice or a recommendation to buy, sell or hold any security and shall not be deemed an offer to sell or a solicitation of an offer to buy any security. The views and opinions expressed herein, which are subject to change without notice, are those of the issuer or its affiliated companies at the time of publication. Certain data used are derived from various sources believed to be reliable, but the accuracy or completeness of the data is not guaranteed and no liability is assumed for any direct or consequential losses arising from their use. The duplication, publication, extraction or transmission of the contents, irrespective of the form, is not permitted. This material has not been reviewed by any regulatory authorities. In mainland China, it is used only as supporting material to the offshore investment products offered by commercial banks under the Qualified Domestic Institutional Investors scheme pursuant to applicable rules and regulations. This document is being distributed by the following Allianz Global Investors companies: Allianz Global Investors U.S. LLC, an investment adviser registered with the U.S. Securities and Exchange Commission; Allianz Global Investors GmbH, an investment company in Germany, authorized by the German Bundesanstalt für Finanzdienstleistungsaufsicht (BaFin); Allianz Global Investors Asia Pacific Ltd., licensed by the Hong Kong Securities and Futures Commission; Allianz Global Investors Singapore Ltd., regulated by the Monetary Authority of Singapore [Company Registration No. 199907169Z]; Allianz Global Investors Japan Co., Ltd., registered in Japan as a Financial Instruments Business Operator [Registered No. The Director of Kanto Local Finance Bureau (Financial Instruments Business Operator), No. 424, Member of Japan Investment Advisers Association and Investment Trust Association, Japan];and Allianz Global Investors Taiwan Ltd., licensed by Financial Supervisory Commission in Taiwan.

Our clients and investment professionals recently met in Berlin for our 10th annual Asia Conference. Here are some of the highlights from two days of discussions about the world’s most dynamic region.